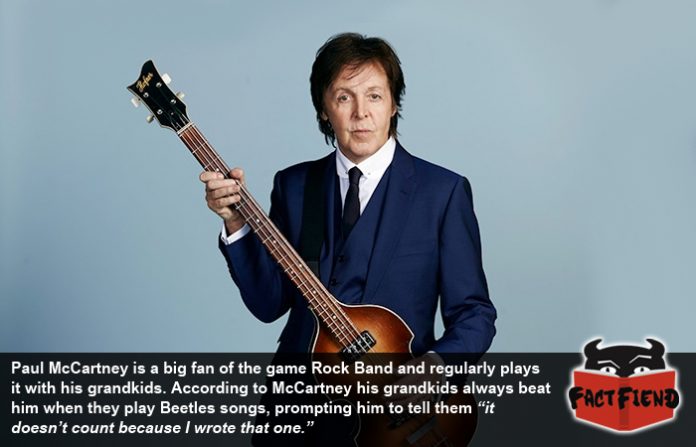 By his own admission, Paul McCartney isn’t the best guitarist on Earth, he is however fairly confident in his abilities, unless of course you give him a plastic guitar and ask him to play one of his own songs on Rock Band. In which case, he’ll fall to pieces like an iPhone colliding with a Nokia 3210.

Yes, Sir Paul McCartney a founding member of one of the biggest rock bands, well, ever, can’t play his own songs in a video game using a plastic, made-in-China piece of shit controller with 5 buttons. Specifically the former-Beetle has admitted that he simply cannot play some of the songs on the special Beetles edition of Rock Band on the harder difficulties even though he fucking wrote them.

Now you’re probably thinking “so what, it’s not like these games are supposedly to realistically represent what it’s like to play a real guitar” which is when we bring up that, while that’s true for other games in the franchise, it’s not exactly the case for this one. You see, Harmonix (the guys who made the game) spent hundreds of hours painstakingly mapping the note charts for the game’s music so that it matched as closely as possible with the actual finger movements the band made in real life. In other words, they tried really, really hard to make this particular Rock Band game as close to the actual experience as possible and McCartney still sucks at playing it even though he’s the person they based all that stuff on

What makes things worse for McCartney is that according to him, while he can’t play any of the songs in the game on the harder difficulties, his grandchildren can. Something they apparently taunted him endlessly about, right up until he calmly pointed out that he, you know, wrote and performed half the songs they were playing.

We’re assuming that this verbal smackdown was followed by McCartney swaggering across the room like a Gorilla holding a pimp cane because that’s an image we never want to leave our heads.

What makes this funnier is that McCartney is far from the first guitarist to find themselves having their ass kicked in a video game by a something they made. Herman Li of Dragonforce fame famously can’t even play the opening riff of his band’s most famous hit, Through the Fire and Flames, in Guitar Hero even though he can play the entire thing in real life, under-fucking-water.