Micheal Jackson is often referred to as the king of pop as a nod to the amount of dick he crushed under the weight of his album sales, as it turns out, the name was more descriptive than most people realise given Jackson was technically a real King.

Specifically MJ was officially crowned the monarch of the Kingdom of Sanwi, a small African country nestled in the bosom of the Ivory Coast in 1992. To be clear here, Mr Thriller wasn’t crowned as part of a publicity stunt or some other lame-ass shit like that, he was the actual recognised King of the tiny African kingdom. Why did the Kingdom decide to make Michael Jackson their king? Because why the fuck not make Michael Jackson their king? 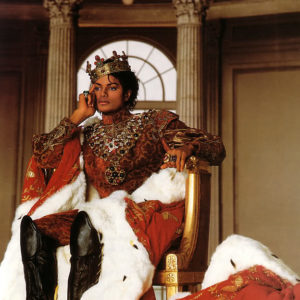 Jackson was unexpectedly given the honor by a high-ranking Sanwi tribal chief who’d heard from mystics that Jackson was a descendent of the royal bloodline while visiting the kingdom in 1992. Scared of offending anyone, Jackson decided to just roll with this news and accept the position. He signed papers officially accepting the role of King (technically king-in-waiting since he couldn’t run the country from America) and then oversaw his coronation ceremony from a golden pimp throne while wearing a fedora flanked by half naked natives.

Jackson was deeply humbled by the experience and seldom discussed it, noting in an interview with Ebony magazine after returning to the States that he didn’t want the title to go to his head. Seeing as MJ was a little busy being a musician, his title was later given to one Amon N’Douff V who after being crowned King, conferred the title of Crown Prince upon Jackson, allowing him to maintain his status as royalty and giving him a legitimate claim to the throne if he ever wanted it.

Though Jackson’s official duties as Crown Prince were largely ceremonial, he was nonetheless well-respected by his subjects who, upon hearing news of his death in 2009, mourned his memory for 2 solid days. Jackson was granted a Royal funeral that was attended by thousands of natives while King Amon N’Douff V searched for a candidate to replace him. No candidate ever came forward, because who the fuck do you get to replace a guy so cool he was a double king?