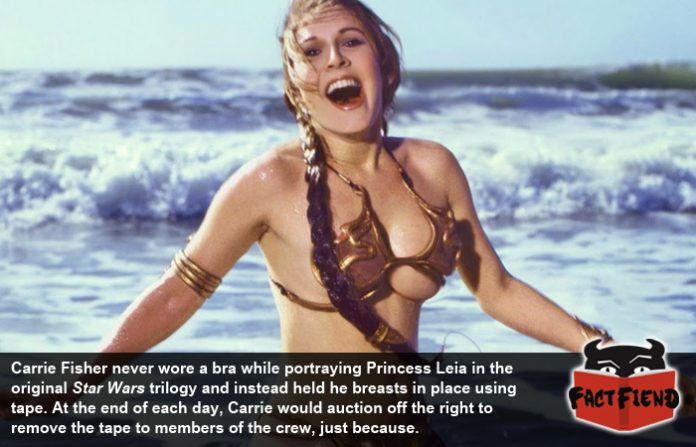 Fisher begrudgingly agreed and for the entire original trilogy, let the girls do their own thing, only using a small amount of tape to keep them in place so as to not earn the film an R rating if she turned around too quickly. For the most part, while Fisher’s lack of a bra went mostly unnoticed by the cinema going public, the cast of crew never let it go. Hell there’s even a scene in Return of the Jedi where you can clearly see Harrison Ford grope Fisher while she’s pretending to be passed out.

At the end of every day of shooting, Fisher’s boob-tape needed to be removed, a time which quickly became the crew’s favourite part of the day. This prompted Fisher to jokingly suggest she auction off the right to do it to whoever flashed enough cash to make it happen, a suggestion that went over way better than she’d thought.

Seeing the entire crew basically lose their minds about the offer to rub their hands all over her naked torso kind of made Fisher a little uncomfortable, however she also felt bad about going back on her initial promise. So she compromised by walking into a nearby office and photocopying her lady lumps so everyone could enjoy them. Fisher then handed out the copies to random members of the crew, because 70’s era Carrie Fisher didn’t give a fuck.

What exactly happened to these copies and whether or not they still exist is a total mystery with even the Lost Media Wiki, which is dedicated to cataloguing, well, lost media, admitting that they no idea where they could be.