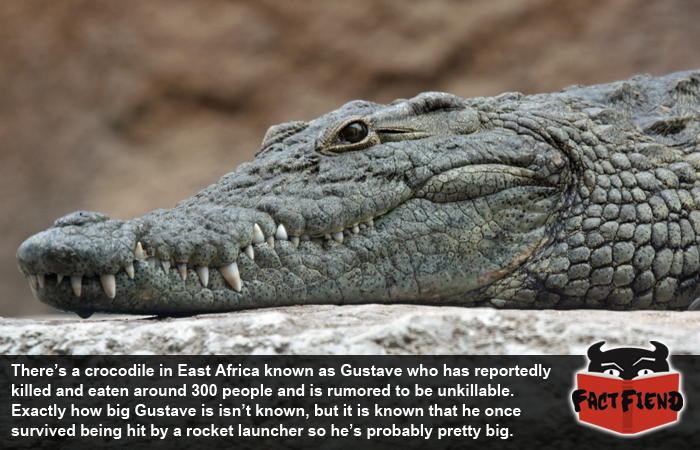 You can see a video version of this article below and hear and extra bonus story about a fireman I met called Corporal Ben Dover.

If that’s not your thing, check out the original article after the jump.

Within the areas they can naturally be found and a handful zoos with crappy fencing, Nile crocodiles are described as being “apex predators”, the scientific and supremely badass sounding title given to animals so comprehensively unfuckwithable that no other animals dares prey on them. While all Nile crocodiles are considered to be apex predators, a large example of the species known as Gustave is unique amongst his kin due to his habit of attacking humans.

According to local legend, Gustave has killed more than 300 people during his several decade long career as a large crocodile. Gustaves usual modus operandi involves snatching people from the edges of the Rusizi River in Burundi, East Africa and leaving their corpses uneaten. In regards to the latter, this has proved to be the most enduring aspect of Gustave’s and his habit of dragging people into the water just to watch them drown has led some to assume that the homicidal crocodilian kills reasons other than needing to eat like practising how to hunt or perhaps more likely, that he’s an asshole.

Exactly how large Gustave is isn’t known, though conservative estimates based on photographs, descriptions from people who’ve seen him and still have enough limbs to make wildly exaggerated hand measurements and bite marks in wildebeests say he’s likely well over 20 feet long and probably weighs over 2000 pounds. Or to put it another way, big enough that you could shoot him in the face and he wouldn’t even give a fuck.

That’s not hyperbole by the way, along with his massive size and impressive girth, Gustave is recognisable due to a number of bullet wounds he sports along his body. The rambunctious reptile is said to have gotten these scars during run-ins with African soldiers, who have supposedly attempted to kill him on multiple occasions with sustained volleys of AK47 fire. Locals insist that on these occasions Gustave escaped harm by “eating the bullets” and swimming away while giving everyone whatever the crocodile version of the finger is. Scientists have disputed this admittedly awesome theory, instead suggesting that Gustave’s sheer bulk and size simply makes him bulletproof which is somehow way more terrifying.

In fact, Gustave is so large that he’s known to hunt and kill hippos, an animal so tough that when human poachers want to kill them, they have to use fucking rocket launchers. Speaking of which, along with being wholly bulletproof and able to shrug off sustained fire from a dozen assault rifles, Gustave is rumored to have once survived being hit, albeit indirectlym by an RPG round fired by a soldier clearly angling for a promotion. While this sounds unlikely, dozens of soldiers claiming to have had run-ins with Gustave have admitted that they were only able to scare him away by throwing hand grenades into the water, so it’s not like he’s a stranger to people trying to blow him the fuck up.

All of these things have combined though to make Gustave a veritable legend in the African villages along the river he calls his home to the point many believe him to be some sort of demonic entity. A belief we’d make fun of if we weren’t genuinely scared that this thing might get so angry with the world it learns to fly or something.