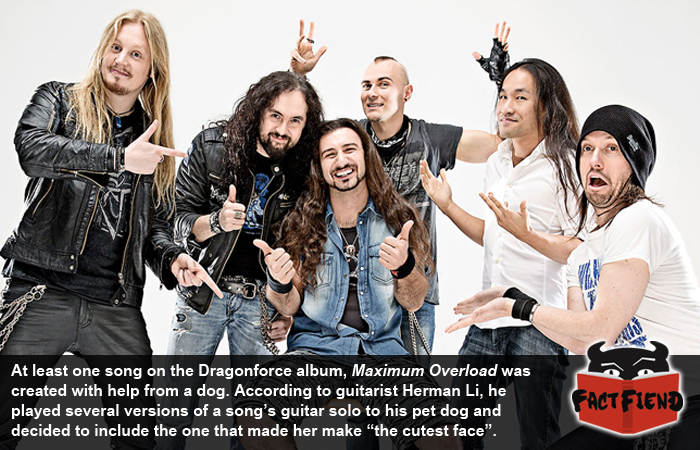 DragonForce is best known as that band with that one really fast song in Guitar Hero 3 and over the years they’ve built up a reasonably dedicated following by releasing album after album filled with blisteringly fast, face-melting guitar solos. Apparently, at least one of those guitar solos was only included on the album because the guitarists dog seemed to like it.

In an interview with Arena about the bands latest album, Maximum Overload, guitarist and owner of the most metal hair in the entire world, Herman Li discussed how he had some trouble deciding which take of a solo he’d recorded for the song Three Hammers sounded best.

According to Li, he felt that each take was pretty awesome and had trouble deciding which one would work best on the album, until that is, his dog walked into the room and immediately started rocking the fuck out. Apparently Herman’s dog is a bit of a metal head and she is said to particularly enjoy his signature, squealing guitar solos. So much so that she will apparently do that stupidly adorable head tilt thing whenever he rips a bitchin’ solo at home, or at a high enough frequency that it transcends all Earthly boundaries at beams directly into her waiting, fuzzy ears.

Rather than asking his bandmates or the sound engineers which take sounded best, Li decided that he’d instead play them all to his dog and intently watched her face, gauging how adorable she looked during each one. He then took the take that his dog responded to most positively and put it on the album, reasoning that his dog’s superior sense of hearing had picked up on something in the take his lesser human ears couldn’t.

We’d be tempted to say this was one of the most ridiculous things the band has done, if it wasn’t for the fact that Herman Li also happens to have once played an inhumanely fast guitar solo with the guitar held behind his head, underwater, just to see if he could.

For more examples of dogs shitting all over their supposed human “masters”, why not read our article about how the dog from Fraiser got more fan mail than he did.