There arguably hasn’t been a decent Predator movie since Predator 2, meaning we haven’t had a good Predator movie in 25 fucking years. Which is a little odd when you consider studios have been sat on an amazing Predator story for almost a decade.

For anyone who hasn’t seen Predator 2 and doesn’t mind reading quarter century old spoilers. At the end of the movie Danny Glover’s character is rewarded with a sweet-ass flintlock pistol by an elder Predator for managing to pull off the not unimpressive feat of killing a stab-punching a Predator to death. After presenting Glover with the pistol, the Elder Predator promptly fucks off forever, though not before Glover looks at the pistol and notices that, holy shit, it’s from 300 years ago.

According to a comic released in 1996 called Predator: 1718, that pistol originally belong to a pirate captain called Raphael Adolini who at one point, met the same Predator Glover did and gave it to him as a gift. According to that same comic, the Predator had deemed Adolini to be a worthy opponent after watching him stab his way across the West Indies and had planned on challenging him to a fist fight. Why the creature with a shoulder mounted death cannon felt a pirate with a flintlock pistol was a worthy foe is never explained, but we can assume that Adolini must have done something unthinkably badass off panel to impress it.

Moving on, unbeknownst to the Predator, Adolini was right in the middle of dealing with a mutiny because he’d told his men they weren’t allowed to steal gold from a church, proving that he’s a man of integrity, but a pretty shitty pirate.

When the Predator sees that Adolini is about to be stabbed like 80 times in the face and torso by his cowardly crew. it pulls out a bitchin’ extendible sword and heroically leaps to his aid so that they can team up and take out his former crew, together! Despite the inherent language barrier that would naturally exist between an illiterate pirate from the 18th century and an alien who can only repeat back swear words and scream, Adolini and the Predator are able to communicate effectively enough to do that cool thing where you stand back to back with someone and spit out ballin’ one liners. 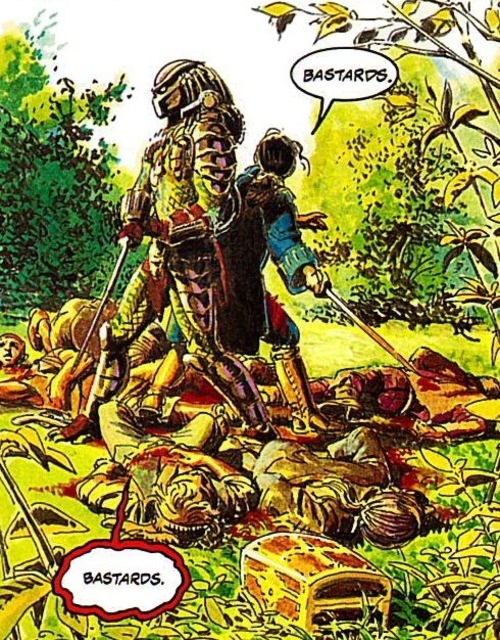 After murdering the everloving fuck out of Adolini’s former crew, the Predator then assumes a battle stance and challenges the pirate to an honourable duel to the death. Adolini cleans the blood off his sword and similarly assumes a fighting pose. However, before Adolini is able to bludgeon the Predtor to death with his testicles, he’s hit in the back by a bullet fired from the sole survivor of the slaughter. The fact this survivor used their last bullet and wasted the element of surprise to shoot Adolini instead of the 7ft tall alien murder-beast he was in the middle of challenging to a stab fight only serves to show off how utterly fucking boss he must have been.

After mortally wounding Adolini, the crew member is almost immediately blasted into human jelly by the Predator who is rightfully pissed as all hell that it has just been robbed of the thing it’s established all Predators want, to take part in fights that will one day become album covers for power metal bands. To thank the Predator for almost saving his life and being an honourable foe, Adolini gives it his prized flintlock pistol. The Predator, clearly touched by Adolini’s actions, gives him a warrior’s funeral and leaves behind its sword made of world-changing material right next to 80 dead pirates and a box full of gold.

But here’s the best part, the only reason this story ended up being released as a comic is because the rights-holders to the Predator franchise couldn’t figure out a way to make it work as a film. You see, the entire reason Glover’s character is given the pistol at the end of Predator 2 is because the screenwriters wanted to set a sequel in the past and needed to include something that established that the Predator race had been dicking around on Earth for centuries.

While it’s not clear if the movie would have involved Predators fighting pirates, it would have almost certainly involved them fighting a group of people who didn’t have access to modern weaponry and thus had to combat the Predators using their wits and ingenuity like Schwarzenegger did in the first Predator movie. 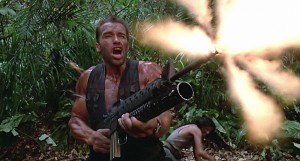 Sadly this film, for one reason or another, was never made, and we instead got stuck with the shitty AvP movies and a sequel where the Predators fight Morpheus, which is nowhere near as cool as we’re making it sound.

For more dumb bullshit from the Xenoverse, read our mini-article on what happened to Weyland-Yutani Corp in a deleted scene in the fourth Alien movie. Or, why not learn about why none of the Aliens have eyes.