The Yakuza series of video games mostly centred around the adventures of one Kazuma Kiryu, an impossibly cool god-tier dickhole smasher who throughout the series whups a near-infinite amount of ass. Now you’d think actual members of the Yakuza would be flattered being compared to this guy, as it turns out though, they mostly just hate his shirt.

If you’ve never played the Yakuza series or are unfamiliar with what Kazuma “baddest motherfucker in the universe” Kiryu looks like, this is his default appearance for most of the series. 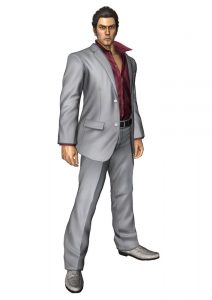 That white suit is synonymous with the character and is fairly iconic in the sphere of video games, that latter of which is helped by the fact Kiryu is an undefeatable badass who possess more ways to shatter a human eye socket than a NASCAR steering wheel made of fists.

In the context of the game he exists in, Kiryu is a mythical Übermensch, a fairy tale whispered by people with unshattered collarbones moments before he punches through reality and turns their asshole inside out with a motorbike. 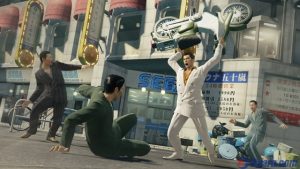 He is utterly invincible in one-on-one combat and the legend of his physical prowess reads like the first draft of an Expendables movie starring the ghost of Bruce Lee. He can kick people hard enough to send them 20 feet through the air, perceive time so quickly he can deliver 30 backhands in the blink of an eye and once knocked the fuck out of a tiger. Twice.

Kiryu’s skills aren’t just limited to tit-shatteringly awesome acts of punch-based badassery either because he’s also capable of performing equally as balls out insane things in a taxi, which he drives in one game after the children at the orphanage he ran grow up. None of that is made up.

In 2010 a journalist with balls possessing a similar density and magnitude to condensed dwarf stars decided to show this game to actual members of the real-world Yakuza to see what they thought. Amazingly, not only did the Yakuza members enjoy the game, they praised it for its realism. Now this is probably hard to believe when there’s a GIF of a guy Tokyo-drfiting the shit out of a taxi 3 inches above this sentence, so let us explain. The Yakuza members enjoyed the detail showed in specific regards to the Yakuza and their customs, praising everything from how they spoke to the manner in which they dressed, with the exception of Kiryu, the tiger-punching former Yakuza boss discussed above.

Specifically they hated his shirt, stating that it looked cheap and was more in line with what a low-level Yakuza member would wear. The gang members spent a good few minutes talking about how the shirt and how shitty it looked was pretty much the only thing they found unrealistic about the version of Yakuza 3 they were playing.

One thing worth noting is that they couldn’t understand why exactly Kiryu was beating so many people up, with one perplexed Yakuza member asking aloud, “Why doesn’t he just shoot them?”, a comment that reinforces what we said about that journalist’s balls.