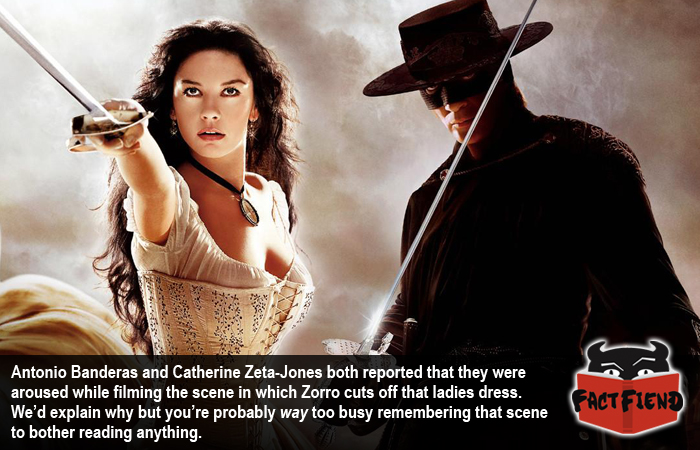 This article now comes in video form and includes a bonus totally true and extremely embarrassing story about a friend of mine.

As per usual, the original article can be found below if that’s more your thing.

That one scene in the Mask of Zorro movie in which Zorro cutting off Elena Montero’s dress is so ingrained in pop culture that the entire scene has its own entry on Wikipedia, oddly that’s not the weirdest part of this entry, no, the weirdest part is that both people in that scene later admitted to being really turned on by it.

Yes, both Antonio “Puss In Boots” Banderas and Catherine “is she still dating that old guy?” Zeta-Jones have expressed in interviews about their involvement with the classic 90’s movie that they were both aroused by the entire scene. Like, really aroused, which if we’re honest, we could kind of tell from Zeta-Jones’ reaction, but it’s still kind of weird.

In a 2006 interview with E!, (boy is that going to play hell with our spellchecker) the pair both admitted that the entire scene was incredibly arousing for them. Note that we didn’t say “romantic” or “not at all rapey” back there, which is kind of important because as far as we can tell, Elena should have been terrified during that scene. She was just attacked by a masked man with a sword who literally just cut off all of her clothes, what part of that is arousing? The part where he could have nicked an artery? The part where he threatened to stab her in the neck? Seriously, since when was “erotic sword play” considered an integral part of turning a woman on and where can we sign a petition to have it taught in schools?

According to the interview, Banderas was aroused by Zeta-Jones’ beauty while Zeta-Jones was turned on by Zorro’s curious way of undressing her character. We’re not sure why exactly Banderas thought he needed a sword in his hand to appreciate a buxom naked actress, but we’re sure as hell not going to pry into it.

No, what we’re going to do instead is invite you to watch the scene for yourself and ask you to keep in mind that during the entire thing Antonio Banderas was probably nursing an erection at the thought of stab-stripping Catherine Zeta-Jones down to her underwear. Now try watching the rest of the movie knowing that.