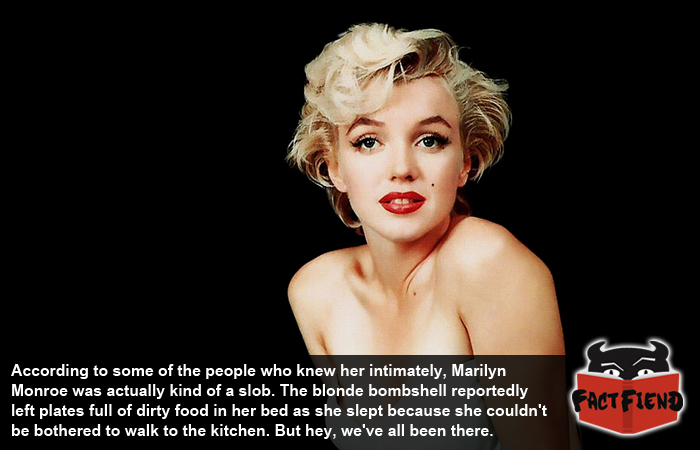 When she wasn’t having warm air blown up her cooch in a flowing white dress or taking 47 takes to say one line in a film, Marilyn Monroe, like any of us, spent most her free time at home. However, in contrast to the nice-girl, butter-wouldn’t-melt persona she maintained in public, Monroe was apparently a total slob on her own time.

According to a number of Monroe’s former lovers and several of her maids, Monroe’s personal cleanliness, unlike her, left a lot to be desired. In fact, Monroe was apparently so lackadaisical about her personal hygiene that several of her maids just up and quit because they were so sick of cleaning up after her.

For example, according to Lena Pepitone, one of Monroe’s former housekeepers, the starlet would frequently laze around the house in dirty clothes with huge piles of dirty dishes stacked next to her bed. Which to be fair, doesn’t sound all that far removed from how we spend our free time and we’ll bet Monroe looked a shit-ton better than us doing it. But here’s the thing, Monroe’s cleanliness was apparently so bad that several of her former lovers have claimed it almost put them off ever dating her at all. Which is, well, insane. This is Marilyn Mon-fucking-roe we’re talking about here. Seriously, look at this picture …

And now tell us how bad her apartment would have to smell before you’d not want to sleep with her.

Apparently what almost put Clark Gable off dating Monroe was her habit of eating in bed, nude. Which you probably think sounds kind of awesome until you learn that when Monroe was full, she’d scrape any leftover food she had left on her plate under her sheets and then sleep on top of it, though presumably not before winging the plate across the room and mentally giving her maid the finger.

When she woke up the next day, rather than clean any of the mess up, Monroe would just leave it for her maids to deal with, you know those same maids who quit all the time, meaning the food often went without being cleaned up for days. Jeez, it’s no wonder Clark Gable thought twice about dating her.

Not that this detracts from anything Monroe accomplished in her lifetime or makes her any less of icon. But hey, it sure as shit makes you think about the context behind all those “if you can’t handle me at my worst you don’t deserve me at my best” image macros you see floating around on Facebook.