Pigeons have been used in war for years, though they primarily only carried messages, the fact they were used to often transmit classified information over long distances made them a prime target for a lead enema. Not to mention who could resist shooting a plump breasted pigeon, there are bonus points for people who recognize that reference.

Cher Ami was one of the best, flying a reported 12 successful mission during WW1, Cher Ami was well on his way to scoring a baker’s dozen when he was shot no once, but twice while trying to deliver a message that would eventually lead the rescue of the legendary “lost battalion”. The shots, which pierced Cher Ami’s breast and leg, actually shattered Cher’s leg to pieces and blinded him in one eye. When he eventually delivered the message, it had to be cut from the remains of his mangled limb.

Out of sheer respect for the heroic little bird the entire medical division worked tirelessly to save his life, because damn did Cher Ami deserve it, though they were unable to save his leg or his eye. Again, out of respect for the little bird, someone actually carved him a tiny, bitchin’ wooden leg. Which means yes, there was once a pigeon that looked more like a pirate than Johnny Depp ever would and he also saved 200 people’s life to boot. Now we hope you feel bad for calling them flying rats with wings. 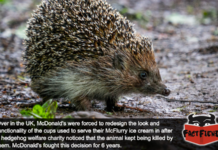