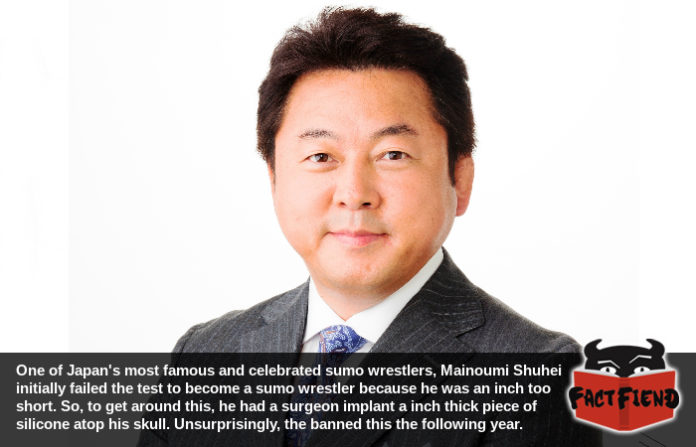 A lesser known fact about sumo wrestling is that the sport (at least in Japan) had a height requirement until the mid 90’s. Now as unbelievable as it’s going to sound, there are multiple confirmed examples of prospective sumo wrestlers having surgery to make their fucking heads taller to give themselves that extra inch after quite literally, coming up short.

The most famous case of this occurring is arguably that of Mainoumi Shūhei, a legendary figure in the world of sumo wresting who is consistently ranked as one of the greatest sumo wrestlers of all time. A fact that is especially impressive considering he near always fought opponents twice his fucking size.

At his competitive peak Mainoumi reportedly only weighed around 200 pounds and clocked in at just over 5 feet and 7 inches tall. For comparisons sake, most of Mainoumi’s opponents weight well in excess of 300 pounds and had around a foot of height on him. If you wondering how such a match up was possibly considered fair, we should probably point out that in competitive sumo, there are no weight classes. Despite being at an objective disadvantage in every single match he took part in, Mainoumi was able to consistently best his opponents through superior sumo. Which we presume is code for wedgie-assisted leg-hooks and bodyslams.

The thing is, the sport almost never had one of its greatest champions because of a rule stating no man shorter than 5 feet 8 inches tall could be a sumo wrestler. Which, if you recall the paragraph just above this, was an inch taller than Mainoumi was. Rather than deny the world the honor of watching him endlessly chest slap giant men into submission while wearing a purple diaper, Mainoumi did the only logical thing and had a small bag surgically implanted between his scalp and skull that was gradually filled with silicone. Before you ask, yes of course there are pictures of this. 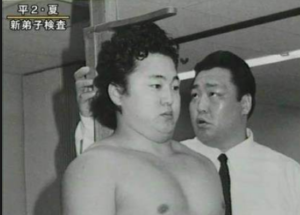 That fabulously maintained coif of hair on Mainoumi’s head is hiding a lump of silicone that, as you can see from the image, made him just tall enough to compete as a sumo wrestler.

At this point you’re probably wondering where Mainoumi got the idea to do something this drastic and the answer, amazingly, is that he got it from other sumo wrestlers who’d done the exact same fucking thing. In fact, while Mainoumi is the most famous sumo wrestler to have done this, he is by no means the most extreme example. That honor belongs to 16 year old Takeji Harada who in 1994 had 6 inches of silicone implanted below his scalp. Again, yes there are pictures of this and yes they’re un-fucking-believable. 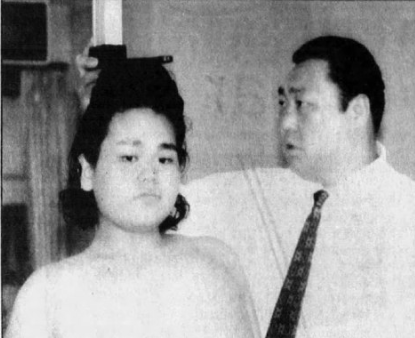 After news of this practise broke in the West, the Japan Sumo Association quietly relaxed the height requirement for sumo and made it known that they would no longer allow wrestlers to skirt the rule by making their heads taller. A decision that allowed Mainoumi to removed the chunk of agony causing material surgically attached to his skull and focus on what he did best. Dunking on fat guys.