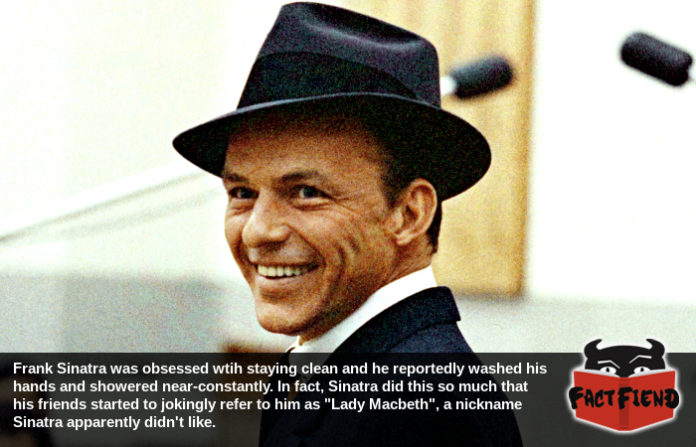 Frank Sinatra is best known for two things; singing a bunch of shitty jazz songs in 1950’s and his love of immaculately pressed suits. In regards to the latter, Sinatra’s obsession with cleanliness was such that his friends made fun of him for it.

Known as much for his sense of style as he was his music, Sinatra spent virtually his entire adult life wearing a bespoke, tailored suit tighter than a blacksmith’s handshake. Friends and family who knew Sinatra best would later recount that the musician would regularly dress in a full suit when he was just lounging around the house and would get dressed just to walk to the bathroom and take a dump.

Sinatra’s commitment to dressing to the nines at all times has made him a popular subject men’s style magazines, many of which consider him an icon of male fashion. To this day websites continue to write long rambling articles about Sinatra trying to discern why his look is so timeless. Personally we’d chalk it up to the fact he only ever wore suits that cost more than a car, but clearly there’s more to it.

In addition to spending every waking moment in a pristine suit sharp enough to give Smaug a papercut, Sinatra obsessively showered and washed his hands. This quirk of his personality was so pronounced that Sinatra’s friends jokingly called him Lady Macbeth. You know, as a nod to that Shakespeare character who scrubbed her hands red-raw after a spot of casual premeditated murder.

Sinatra’s unusual obsession with keeping his digits squeaky clean was a common tabloid fodder, leading to the singer being, as one newspaper put it “a natural target for amateur psychologists“. Not that these psychologists ever really discovered anything all that interesting seeing as the leading theory they had about why Sinatra liked keeping his hands so clean is that he had a touch of OCD. Something that was kind of given away by the fact he wore a 3 piece suit every single day and showered, according to one of his ex-wives, about 60 times a week.

A plus side of Sinatra’s obsessive cleaning routine is that he reportedly smelled amazing, like all time and just the act of him walking into a room was enough to fill the air with the refreshing scent of freshly picked lavender. Which is nice.