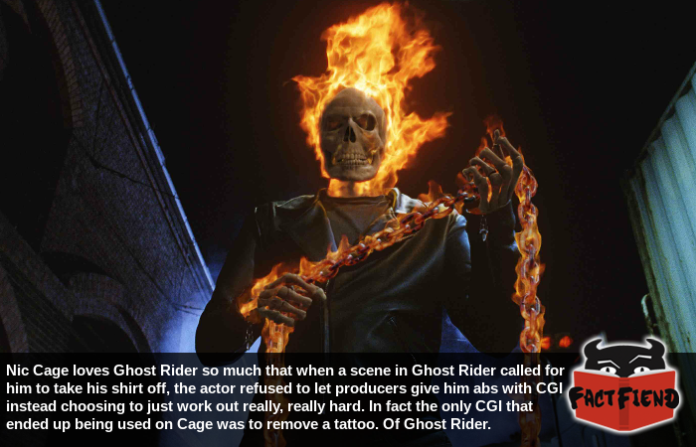 Nic Cage is a man who loves him some comic books, so much so that when the (at the time) 42 year old actor was cast as Ghost Rider he turned down the offer to sit on his ass for 6 months and instead hit the gym to get abs. A set of abs so ridiculous looking that a lot of people assumed they were fake.

First though, for people not aware of just how much Nig Cage loves comic books even the guys own fucking name is an allusion to his favourite entertainment medium. You see, Cage was born Nicolas Coppola but decided to change his name when he got into acting to avoid accusations of nepotism (his uncle is the famous film director Francis Ford Coppola). While sat thinking of a new name to go by Cage’s thoughts, as they seemingly often do with him, turned to comic books. Specifically Power Man, AKA, Luke Cage.

When Cage became a big-dick actor-man he reportedly wasted no time buying a literal vaults worth of comics including a rare mint copy of Action Comics #1 he sold for like $2 million. Other ways the actor’s love of comics has manifested include naming his son Kal-El Cage and getting a huge tattoo of Ghost Rider on his bicep. Which kind of made things awkward when Cage was cast to play the Spirit of Vengeance in 2007. 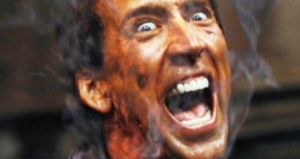 According to people present on what must have been an amazing production, Cage absolutely threw himself into the role of Johnny Blaze and showed an admirable level of professionalism considering he was playing an angry CGI skeleton. Cage was reportedly very keen to portray Johnny Blaze the right way, going as far to buy a creepy voodoo mask to “get into the mindset of the Ghost Rider” that he wore on set whenever he was filming a scene where his head was going to be replaced with a flaming skull. When the producers explained to Cage that the mask kind of got in the way he begrudgingly agreed to take it off and instead painted his face like he was the bassist of a black metal band.

As amusing as all this is, the hardest part of the production, for Cage at least was getting in shape because apparently when you’re playing a completely CGI character you need to have abs. To be clear, nobody told Cage he needed to gave abs for the movie, it’s just that when he landed the gig he somehow got it into his head that Ghost Rider needed to be ripped as balls.

As you can see from that image, Cage did somehow manage to get swole for the role, much to the astonishment of people who watched the film, many of whom believed Cage’s abs had to have been altered, digitally. Which is fair, because holy shit Nic Cage was 42 when he made that film.

Journalists were similarly sceptical of Cage’s temporary transformation into The Thickness for that scene and, understandably, it was something they kept bringing up. In an interview with IndieLondon Cage laughed off the insinuation digital trickery had been used to give him abs, claiming that he simply worked out super hard for like 5 hours a day, every day while making the film.

This said, both Cage and his co-star Eva Mendez were apparently well aware of how ridiculous the abs looked on his 40 year old frame. In fact Mendez went as far to joke that if she hadn’t have been physically present on the day Cage filmed that scene, she almost certainly would have been one of the people saying they were realised with CGI. Meaning yes, even Cage’s own fucking co-stars didn’t believe the abs were real until they saw them in person.