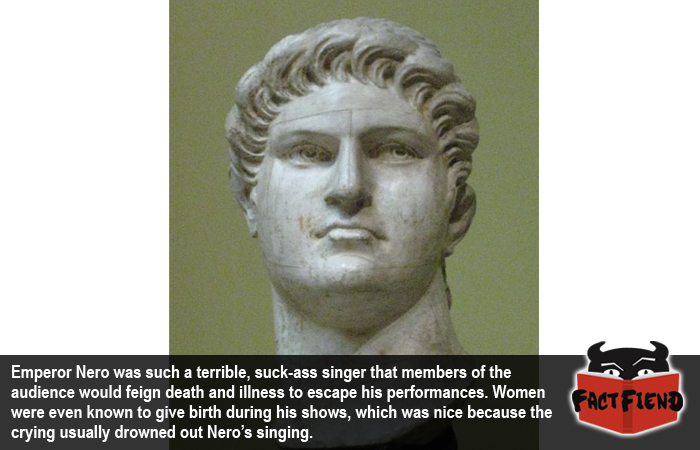 Bad singers are a dime a dozen, however, terrible singers are something special. Anyone can butcher American Pie, but it takes a special kind of person to actively make people want to punch their own ears into dust, Emperor Nero was that kind of person.

Though he had a weak voice, Nero was reportedly very keen to improve it and amongst the tons of other insane crap he did during his stint as Emperor, he’d often lie down and have heavy lead weights places on his chest to help him become a better singer. We don’t know what exactly Nero thought this would do to his voice, but we’re assuming Barry White did it every single day while singing so sweetly all the birds near his house exploded into clouds of honey.

Though Nero’s singing was at first restricted to private sessions and concerts, he later gathered up the courage to start singing in public, whether the public liked it or not. For example, you may know the story of when Nero entered an Olympic games and won every event because he was the Emperor, well back in those days singing was an Olympic event, which meant, in Nero’s twisted logic, he was the best singer on Earth.

Being the best singer in the world, Nero opted to sing for his people in hugely crowded auditoriums so they could enjoy his voice, to make sure no one stopped enjoying his singing, he’d have his guards shut the doors to keep the funk in. Now imagine the worst concert possible, perhaps one featuring Miley Cyrus singing some Christmas classics, in June, in a theatre with floor made of Lego bricks. That would be heaven compared to one of Nero’s performances, along with barring the doors, Nero would force people to listen, if you were bored, you were executed. His concerts were known to go on for so long that women gave birth during them and some men risked instant death trying to climb over the walls to escape.

However, the smartest people were the ones who pretended to drop dead so their lifeless corpses would be dragged outside. Now you can say that some singers today are terrible, but we don’t think any of them are fake-your-own-death terrible. Well except for Miley Cyrus.