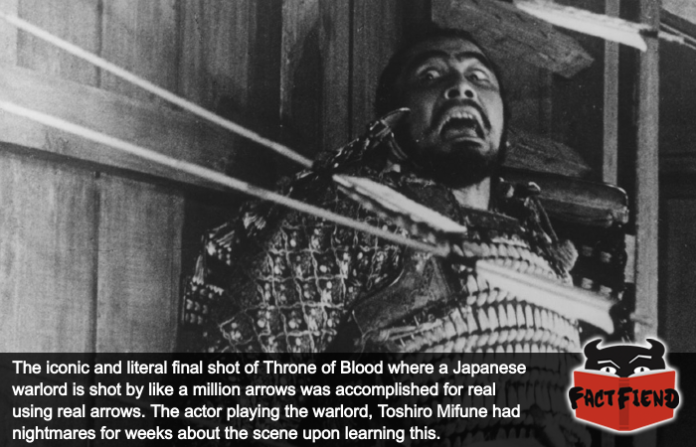 As we’ve discussed on the site before, legendary Japanese director Akira Kurosawa was a micro-managing perfectionist who was famous among his peers for his insistence on getting even the most minor of seemingly inconsequential details just right when it came to making his movies. Something that saw him peppering an actor with about half a dozen actual arrows for a scene where he got shot to death, by arrows.

That actor was Toshiro Mifune, a frequent collaborator of Kurosawa’s who was known for playing the gruff-as-fuck and supremely beardy samurai characters that often featured in his films.

Now while it’s noted that Mifune and Kurosawa had a strong working relationship, there were times when the relationship was strained. Like when Kurosawa was making Throne of Blood and he casually told Mifune that the climax of the film would be him being turned into human pincushion by a pissed off group of archers. Mifune, knowing about Kurosawa’s penchant for realising effects practically began having nightmares about being killed by a cloud of, rather specifically, 21 arrows.

To be clear, that’s not hyperbole or anything, Mifune literally had nightmares about being killed by a hailstorm of arrows for weeks and would reportedly ask the prop master, Koichi Hamamura, if today was the day they were going to film The Scene.

But we’re probably getting ahead of ourselves because there might be people out there unfamiliar with Throne of Blood so we’ll just quickly summarise it. It’s Macbeth with cool samurais instead of medieval Scottish lords. If you haven’t seen Macbeth the summarised version is a guy is convinced to kill his boss by his wife and then kills a bunch of other people to stop that first murder getting out and is then killed himself because for some inexplicable reason, people don’t seem to like that.

Anyway, to realise the movie’s climactic final scene where Mifune got his arrow-based comeuppance Kurosawa insisted on using real arrows, guided to their target by hidden lengths of wire and made less dangerous by replacing the arrowheads with large needles. Mifune was also given small wooden boards to place under his radical samurai armour so that the arrows wouldn’t, you know, kill him. 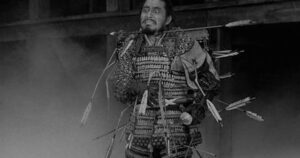 Here’s the thing though, the scene also called for some of the arrows to miss and it’s those arrows that worried Mifune because they were the real ones. While admittedly Kurosawa hired professional archers to shoot them, that wasn’t exactly of much comfort to Mifune who had to spend the entirety of the scene running backwards and forwards pretending to avoid them. Meaning one missed cue or one of the aforementioned archer-extras missing their mark could have ended in Mifune being killed. Something that actually ended up working out great as Kurosawa was able to catch Mifune’s very real look of abject terror for insert shots. Because lets be honest here, nobody is this good of an actor. 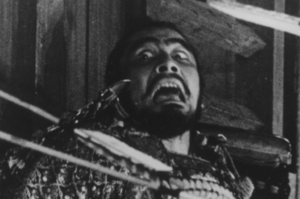 According to Mifune the first thing he did when the scene was finished was wearily ask Kurosawa if they were done for the day. When Kurosawa said they were he asked if there was any shooting planned for the following day. When Kurosawa told him that there were not, Mifune disappeared into a nearby dressing room and then emerged with a few crates of beer he’d stashed away for that exact moment and got the entire cast and crew drunk off their asses.