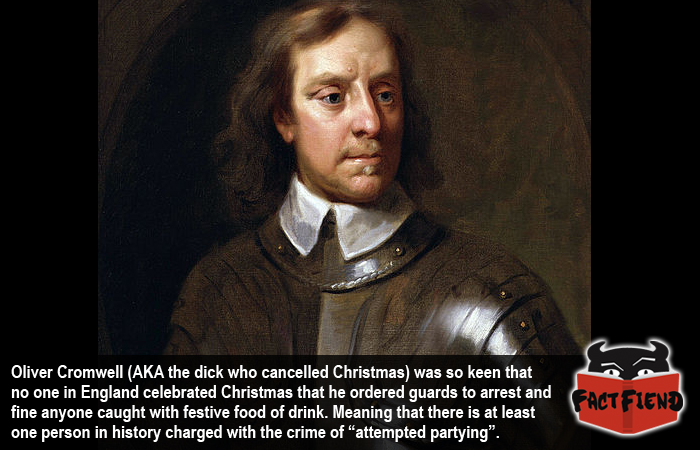 Oliver Cromwell hated so many things that brought people joy, scientists still aren’t sure if he was an internet troll who stumbled across a time machine and used his superior technology. Amongst the huge list of things he outlawed, Christmas is the most infamous.

We don’t mean he outlawed carolling, or giving presents, we mean Cromwell literally banned Christmas. He forced shopkeepers to stay open and pretend that December 25th was just another work day, he had churches barred shut and even had armed guards confiscate anything that could be used to collectively raise the roof. These guards even went door to door checking houses for anything festive, however since anything festive may as well have meant “anything”, guards could punish and fine people for something as simple as having a bottle of wine or a turkey of unreasonable size in their abode.

Weirdly, despite the fact that Cromwell was hugely religious, even going to church on Christmas day was against the law, since that would constitute celebrating and celebrating anything other than another day of being dirt poor but not quite dead yet was apparently illegal back then.

We don’t think we need to tell you how much the country of England collectively felt this sucked and secret celebrations were commonplace across the country, for a while. However, as you can imagine, after almost 2 solid decades of not being able to get stupid drunk on December 25th, when Christmas was finally made legal again by Charles II, people across England had no clue how to celebrate it. Seriously, think about it, it’s likely at that point that around 30% of the entire population had no firsthand account of what Christmas even was.

We’re not one’s to make assumptions, but we’re going to guess that, that first Christmas was really awkward when everyone got socks with an Oliver Cromwell being punched in the face design.