In interviews about the chracter, Toriyama has stated that Frieza’s various designs were inspired by what he personally believed monsters looked like as a child, which amongst other things, leads us to assume that Toriyama’s childhood was fucking terrifying.

Fans have also rumored that some aspects of Freiza’s design were inspired by one of Toriyama’s editors, who was known for being a bit of a bullbusting hardass. Weirdly, this editor never really liked being compared to a character known in the manga as the fucking “Emperor of the Universe” and instead saw himself as being more like the character, Trunks, a guy with bright pink hair because pink hair is cool, we guess?

As for Frieza’s personality, which is described as a combination of sadistic narcissist and screaming childish piss-baby, it’s rumored that Toriyama based it on Japanese real estate speculators. To explain, at the time Toriyama was writing the stories Frieza appeared in the late 80’s, Japan was caught in an economic bubble that saw the price of real estate explode way beyond the rate of inflation. If you want to read more about it you can do so here, but the short version is, it sucked for everyone but the people selling real estate, who made a killing being unthinkable, unrepentant dickholes.

Apparently Toriyama felt that real estate speculators were so odious and unappealing that he was inspired to create the character of Frieza and endeavoured to make him into the biggest dick in the entire Dragon Ball universe. As a result of Toriyama intentionally trying to make Frieza as much of an asshole as possible, he is responsible for some of the worst atrocities committed on the show, like blowing up an entire planet and trying to pull off an outfit made of solid gold when it’s clear he possesses neither the swag or balls to do so.

Weirdly, despite being literally inspired by what Toriyama openly described as “the worst kind of people” and the fact he commits genocide on a bi-weekly basis, Frieza quickly became one of the characters fans liked the most and as a result, he was brought back to life twice. Then again, maybe Toriyama really just liked watching this guy die and brought him back to life just so that he could draw him being cut in half, again. 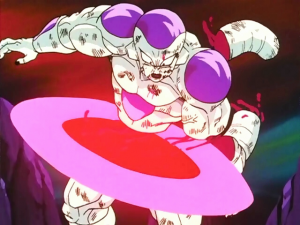 For more Dragon Ball facts, why not read about Goku was redesigned just to make drawing him easier.