A lot of cool things happen in Terminator 2, most of which revolve around a man with knives for hands punch-stabbing his way through half of Los Angeles. Arguably the most iconic moment in the entire film is the motorcycle chase scene, in which Arnold Schwarzenegger reloads a shotgun by twirling it around without it somehow going off and blowing a hole through his torso. What the cameras didn’t see though is Arnie trying it with a real shotgun and nearly breaking his hand off.

You see, the shotgun used for that scene was a heavily modified prop which had an artificially lengthened lever loop which made twirling the shotgun around like a boss possible.

Normally such an action is physically impossible with Winchester shotgun, not that it can’t be done, it’s just that the human body literally can’t handle the strain and testicle weight it takes to do something that cool. The sheer amount of force necessary to pull it off is enough to literally break bones, not to mention the fact you constantly run the risk of accidentally ripping your dick apart with buckshot if you happen to hit the trigger. In fact, part of the reason this scene was included in the movie in the first place was to show that the Terminator was far stronger than an average man.

As an example of the kind of man it would take to pull this off in real life, in the director’s commentary for the Terminator 2, it’s mentioned that Schwarzenegger once accidentally picked up the wrong shotgun on set and tried to twirl it around like he’d done hundreds of times before. Schwarzenegger, who stands at 6ft 2 and weighed more than a small car in his physical prime, nearly broke every bone in his hand attempting it.

Weirdly, because so few people know that the shotgun Schwarzenegger used on-screen was a prop that had been modified, the idea of reloading a Winchester like that being possible has become a veritable part of pop culture. As such, a considerable amount people still think that reloading a shotgun like that is possible, even though it’s REALLY FREAKING DANGEROUS. We honestly dread to think of how many have people have broken their fingers trying to replicate this at home, but we sure hope they filmed it and uploaded it to YouTube because we could do with a laugh. Trying to replicate such a movie stunt could possibly be one of the causes of motorcycle accidents so never try doing it. 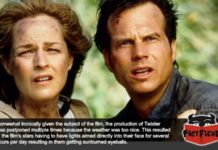