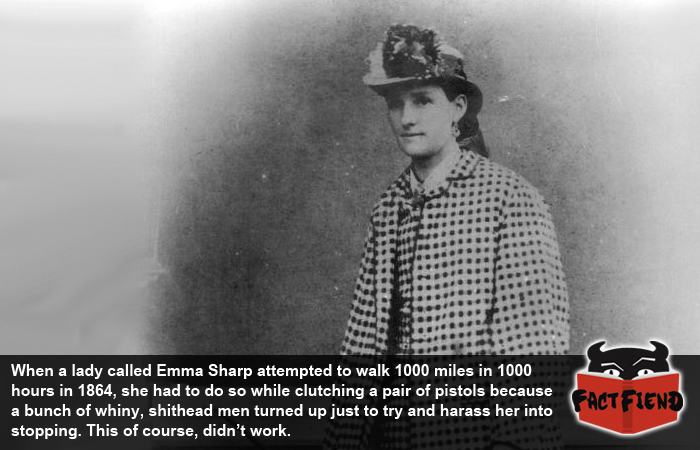 Over the last few months we’ve drawn attention to a few noteworthy celebrities who quite simply, were less capable of giving a shit than a constipated miser. Today we decided to apply that formula to a lesser known, but equally as blasé figure from English history, Emma Sharp.

As noted in the image macro above, in 1864 Emma Sharp up and decided that she wanted to get her god-damn Vanessa Carlton on and walk 1000 miles in under 1000 hours. Far from being an off the cuff decision made by Sharp in one of her rare moments of not trying to kick the patriarchy in its sagging, pendulous nutsack, Sharp was actually inspired to walk the distance by an almost identical feat of endurance walking that had been attempted and failed by an unnamed woman in Australia a few months prior.

Sharp was convinced that a woman could indeed walk 1000 miles and that in the near future, such a feat would be so trivial to a woman that there’d be at least one shitty pop song written about it. One person who wasn’t as sure as Sharp was her husband who explained to his wife that only a man was capable of a feat as gruelling as walking in a straight line and that she’d be better off not even attempting it to save herself the embarrassment of failure. Sharp quite understandably responded to this by telling her husband to fuck off the edge of her dick.

More determined than ever, Sharp approached the owner of a nearby pub to ask about using a small patch of land located outside it. After speaking with the owner, who was one of the few men Sharp encountered at the time who wasn’t a total shit, an arrangement was made for the land Sharp requested to be fenced off. In return for this, Sharp promised the owner half of all the profits she made from ticket sales so long as he didn’t interfere and allowed her to rest periodically in his guest room. If you’re wondering how in the hell Sharp planned to make money selling tickets to this event you need to remember two things: One, the idea of a woman pulling off such a feat was a novelty most people of the era were willing to pay to see and two, Netflix hadn’t been invented yet.

When the day of the challenge arrived on September 17th, Sharp decided to both live up to her last name and piss off the slowly growing crowd of misogynistic cocknuggets that had gathered to see her fail (more on that in a moment), by striding out to the field in a pimpin’ bright red chequered suit and a huge straw hat.

You see, at the time this challenge took place women wearing pants was a huge taboo and people with nothing better to do with their lives gave a massive shit about Sharp’s decision to mac the fuck out. Her decision to wear pants was so controversial and so unthinkable that most newspapers covering the challenge couldn’t even print that she’d put a pair on, referring to them instead as “inexpressibles”, which arguably, just made the outfit that much cooler.

As expected, a huge crowd that eventually numbered in the thousands came to watch Sharp walk endlessly between two posts and very slowly many men in attendance began to realise something, Sharp actually looked like she was going to pull it off. Which was a fucking terrifying thought for the hundreds of men in attendance who’d placed (quite substantial) bets on Sharp losing, believing that her small womanly frame couldn’t handle a brisk stroll. Not wanting to lose their money, these men began trying to distract or harass Sharp in any way that they could in a futile effort to stop her. Other men, just wanting to see Sharp fail for having the nerve to have a vagina and do something physical, also joined in because the asshole quota apparently wasn’t quite high enough that day.

For the last few days of the challenge, men in the audience tried a number of increasingly desperate and violent methods of getting Sharp to stop and each and every single one either failed, or was met with a swift (sometimes literal) kick in the nuts. When men threw things onto the ground, Sharp would kick them aside. When men tried to grab at her clothes she’d respond by drawing one of the several pistol she had on her person and pointing it right at their stupid fucking face or just slapping them with her walking stick. If they tried rushing the course, she’d set her dog on them before sending one of the armed police officers she’d enlisted to arrest them. When one man tried throwing burning cinders into her path, Sharp’s only response was to coolly walk across them like the fucking Terminator, presumably while Dolly Parton inexplicably burst from the heavens.

In the end, Sharp completed the challenge after a 1000 hours of almost non-stop harassment and jeering and earned the begrudging respect of her town, who celebrated with a huge-ass party. Sharp celebrated by taking her earnings and opening up a shop, which we really hope she either decorated with a middle finger motif or refused to build a men’s bathroom in.