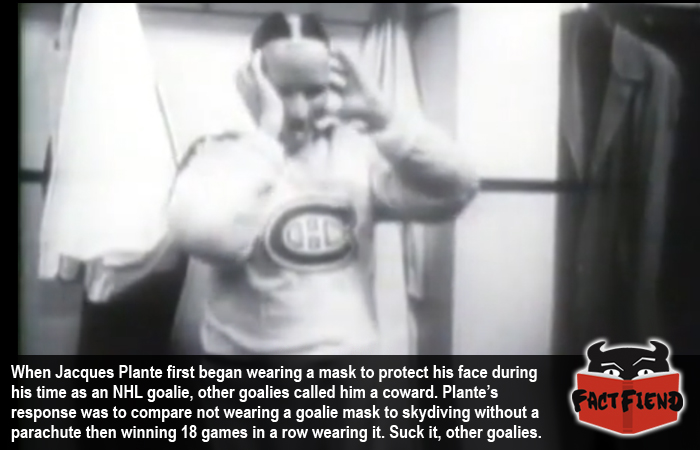 Now while hockey purists and assholes we guess, will gleefully point out that Jacques Plante wasn’t the first person to ever wear a hockey mask while playing in the NHL, Plante was the first person to wear one through choice on a permanent basis. And you better believe that people made fun of him for it.

Early in his career, like every other goalie in hockey in the 50’s, Plante’s face was left open and exposed during every game he played, effectively ensuring that he’d be guaranteed to have a puck smash into his face about 3 times a month. However, during practice, to avoid having his face caved in by his own team-mates, Plante opted to wear a fibreglass mask that made him look like Jason Voorhee’s excitable younger brother.

Oddly, despite the fact that during actual games the likelihood of being hit in the face was exactly the same if not higher than in practice, it never occurred to Plante to actually wear it while playing for real until he had his nose broken in a 1959 game between the Montreal Canadians and New York Rangers. With his nose broken, Plante refused to play another second until his coach allowed him to wear the mask to protect what was left of his face, his coach, faced with either forfeiting or protecting the eyesight of his only goalie, begrudgingly agreed. Because he was one of those assholes we mentioned earlier.

After a wholly uneventful second half in which not a single puck was smashed against his eye socket, Plante decided that he liked wearing the mask and donned it for his next game, which his team won, Plante, sensing some sort of pattern continued to wear the mask each game until his team had won 18 games in a row. However, his coach, Toe Blake, seeing no correlation between his goalie feeling safe and his exceptional performance demanded that Plante take off the mask his 19th game, which they fucking lost. Out of nowhere, Blake then reversed his decision on Plante wearing the mask and he continued to wear it for the rest of his career.

However, here’s the weird part, other goalies made fun of Plante’s choice, questioning his bravery and dedication to the sport, because apparently the only way to prove you’re dedicated to your team it to take a shot to the chops, not win 18 games in a row.

In other words, hockey goalies in the 50’s and 60’s told a guy wearing a mask that would one day become synonymous with one of the most unkillable, well-known badasses in all of fiction that it made him look like a pussy because it meant he wasn’t willing to have his teeth smashed in by a stray hockey puck travelling at Mach 2. 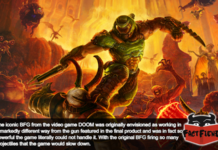