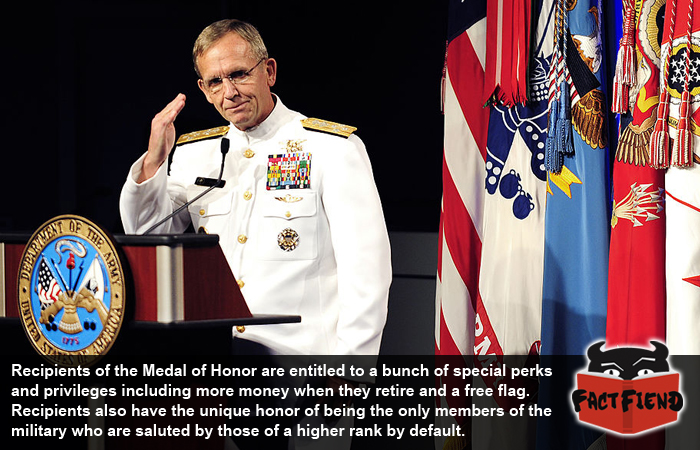 Next to the Astronaut Badge, the Medal of Honor is one of the rarest and most seldom seen awards in the military. Along with the obvious kudos that comes with being officially certified as a total badass by the god-damn President, recipients of the medal are entitled to a slew of benefits few people are aware of. All of which they absolutely deserve.

For starters, winning a Medal of Honor grants the recipient an instant 10% increase to their retired pay on top of a $1000 dollar pension they receive each and every month just for being so awesome, while there’s an upper limit to how much money this can amount to, it’s still nothing to sniff at. On top of this, recipients also get given a special card that they can flash in an airport to travel anywhere in the world for free, as long as they travel via military aircraft. Because travelling alone is kind of lame, recipients are allowed to extend this privilege to include their immediate family meaning there’s literally nothing to stop a Medal of Honor recipient from flying their family to Mexico every day for lunch other than how many tacos they think their family can eat.

Recipients are also automatically invited to every Presidential Inauguration, during which the President is obliged to salute the shit out of them, as is every other member of the military they happen to bump into, regardless of whether or not they outrank them. Then, just to rub it in, unlike other members of the military, Medal of Honor recipients are allowed to wear their uniform and medals whenever the fuck they want, even if all they want to do is sit in Burger King wearing one of those cardboard crowns giving people in the drive through lane the finger.

And if a recipient wants to work off the calories from that meal, they can walk into any military recreational facility free of charge and play tennis or something. Like with the free air travel perk, this benefit can be enjoyed by a recipients family and friends. Recipients can also enjoy a lifetime discount at military stores, which themselves already sell products at a discounted price meaning Medal of Honor recipients are given a double discount on almost everything they buy, forever. Some states also give recipients special license plates for their cars, allowing them to park almost anywhere they want without incurring a fine for driving or parking like an asshole, as is their right as a freaking American hero.

So the next time you flip on the news and read a story about a soldier receiving a Medal of Honor for an act of daring seemingly ripped straight from the pages of the script of The Expendables, you can rest easy knowing that, that person is probably never going to have to worry about money, plane tickets or where to play ever again. Cool huh?