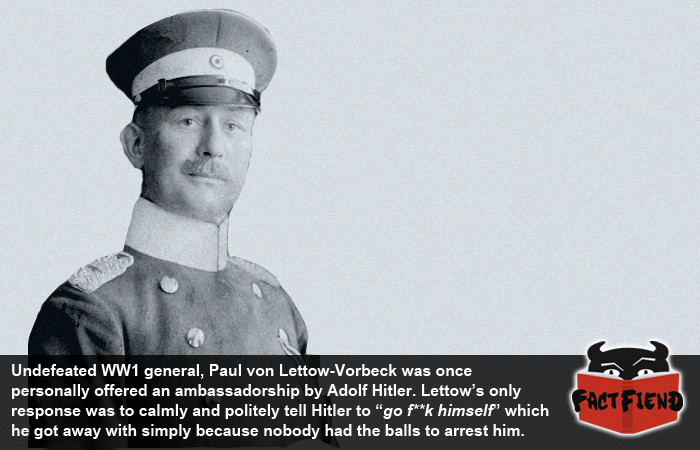 If you were to ask 100 people what they’d do if they had access to a time machine, punch Hitler in the dick or a variation thereof would likely be the most popular answer you’d get back next to slapping a T-Rex in the face, just because. Which is kind of unecessary because a guy called Paul von Lettow-Vorbeck already did that and then some during WW2.

For everyone who isn’t a WW1 history buff, Paul von Lettow-Vorbeck is a name synonymous with ass kicking, name taking and generally being awesome. Lettow is a legendary figure in German history due to the fact he reportedly never suffered a single loss despite often being outnumbered more than 20 to 1.

It’s noted that during WW1, Lettow was pretty much undefeated during the entire war, despite only commanding a force that never once exceeded 14,000 men. Just to remind you in case you’ve already forgotten or just decided to skip straight to this part, Lettow spent the majority of his time squaring off against a force that outnumbered him by a factor of 20. Or to put it in more immediately ridiculous figures, Lettow’s force of 14,000 men routinely went against and defeated a force in excess of 300,000. As if that wasn’t cool enough, Lettow is also famous for being one of the few people to successfully invade British soil during WW1 without being immediately buried in middle fingers and hastily fired off rifle rounds.

As you can imagine, Lettow’s general pimpness during WW1 saw him become an incredibly famous individual in the years that followed, so much so that he was basically above the law since nobody in Germany wanted to be the guy to arrest Paul von God-Damn Lettow-Vorbeck. This was no better proved than when Adolf Hitler (yes, that Adolf Hitler) offered the ageing general an ambassadorship during WW2. Lettow, rather than graciously accepting the position, famously told Hitler, to his face, to go f**k himself. Or so the story goes.

You see, historians aren’t exactly sure what Lettow said to Hitler on that fateful day because for some reason, Hitler didn’t seem to want it recorded. All we know for sure is that Lettow, at the very least, told the most evil man in history to go f**k himself. Because Lettow’s interaction with Hitler wasn’t recorded we’ll likely never know exactly what he said. However, we do know that when a person who was present that day was later asked the question “is it true Lettow told Hitler to go f**k himself?” they responded with, “I don’t think he put it that politely” meaning Lettow probably said something even more offensive than “go f**k yourself”, but alas, we’ll likely never know what it was so we can quote it in every conversation we ever have from now until the day we die. Which kind of sucks.

The story continues that although Lettow’s comments annoyed Hitler to no end,  his reputation as a stone pimp was so absolute that nobody present was willing to arrest him. Because seriously, how could you possibly arrest a man who told Hitler to go f**k himself?