The basic idea behind camouflage is that it’s supposed to make whatever you cover it with harder to spot in a specific environment, then you have dazzle camouflage, which is apparently what happens when you want everyone within an 80 mile radius to know exactly where you are and exactly how much you’re currently working it.

While it may seem that dazzle camouflage sucks approximately all of the dicks at functioning as, well, camouflage, it’s deceptively effective at one very specific thing, confusing the ever loving crap out of the enemy. Though ships covered in dazzle camouflage are much easier to spot than their grey or blue cousins, the crazy-ass jagged lines they were covered in made it incredibly difficult to tell exactly which direction the ships were moving in.

The main purpose of dazzle camouflage, other than looking fucking fabulous, was to distort the outline of the ship it was painted onto making its size and bearing difficult to discern. Because the only real way to tell how far away a ship was during WW1 was to see it with your face eyes, painting ships with dazzle camouflage was a surprisingly effective way to screw the people armed with manual rangefinders over.

Also, unlike other, lesser camouflage, dazzle camouflage worked in every kind of weather because looking fabulous shouldn’t just be confined to a sunny day. Which is probably why it was first used by the British navy, a country who spends more time complaining about how shitty the weather is than every other country and several ape colonies combined.

Sadly, for reasons we simply cannot fathom, painting military vessels to look like a zebra’s dick fell out of fashion after WW2, so our dream of a Call of Duty game where we get to fly a robot tank painted to look like Iron Man will have to stay a dream. 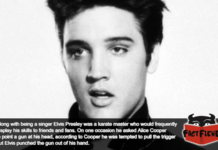