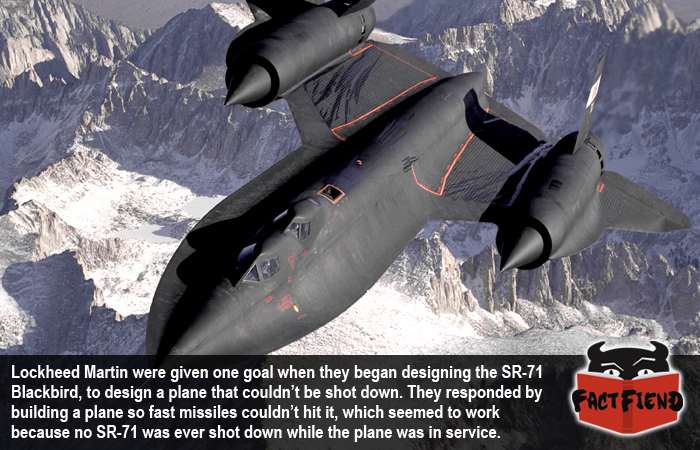 The SR-71 Blackbird is one of the fastest manned aircraft in the world capable of moving at speeds in excess of Mach 3, it was also almost impossible to shoot down.

If you’re thinking this must have been because the SR-71 was built with superior anti-missile technology or something like that, it wasn’t, it was just so fast that nothing could in the skies at the time could physically shoot it down. Which is kind of like a boxer calling himself undefeated because his gloves were covered in asbestos and all of his opponents were on fire.

But we digress, regardless of how it avoided enemy fire, the SR-71 proved to be untouchable in the sky which is exactly what President Eisenhower wanted. You see back in the 60’s when the SR-71 wasn’t even a sketch in a bored kids math textbook and at the height of the Cold War, Lockheed Martin’s Advanced Development Program (colloquially known as the Skunk Works, seriously) were called upon to make a plane the Soviets couldn’t shoot down. A feat many at the time deemed impossible.

Luckily none of those people worked for Lockheed Martin and they sank their teeth into the project like a dog eating a day old steak covered in BBQ sauce. The thing is, because the project had been deemed “impossible” (it literally said that) virtually every part of the plane had to be invented first, yes, this thing was so high-tech it was made of parts that only existed theoretically. Even Batman doesn’t pack gadgets that advanced.

Everything from the plane’s fuel tank (which leaked on the runway because it was only designed to be airtight when it was travelling at 2000MPH) to its color (which needed to be dark blue to stop it catching fire, literally!) were entirely new concepts the design team had to invent on the fly. On top of that they were also given a remarkably short amount of time to actually get the thing into the air. The fact it even exists is a statistical anomaly we hope God doesn’t notice because he’ll have to reset the Earth.

Against all of the odds, the team, headed by aircraft designer Kelly Johnson, not only managed to invent a plane that literally couldn’t be shot down by conventional means, they invented one of the fastest manned aircraft to have ever existed, ever. As an idea of just how ridiculous this thing was, it was exposed to such huge amounts of force during flight that the first few bunches of titanium they manufactured to make it became so brittle they’d shatter when dropped on the floor. The SR-71 is so badass even fucking titanium isn’t tough enough to make it onto this thing without significant improvements.

As mentioned above and here, right now because it should never stop being mentioned, the SR-71 was also so fast that no weapon of the day could lock onto it and no Soviet plane could hope to keep up with it at maximum speed, all but making it immune to weaponry not ripped out of a Halo game. At the end of its service life it was made known that not a single SR-71 had ever fell due to enemy fire. 12 of them crashed mind you, but that was mostly attributed to pilots flying so fast they hit themselves from behind.