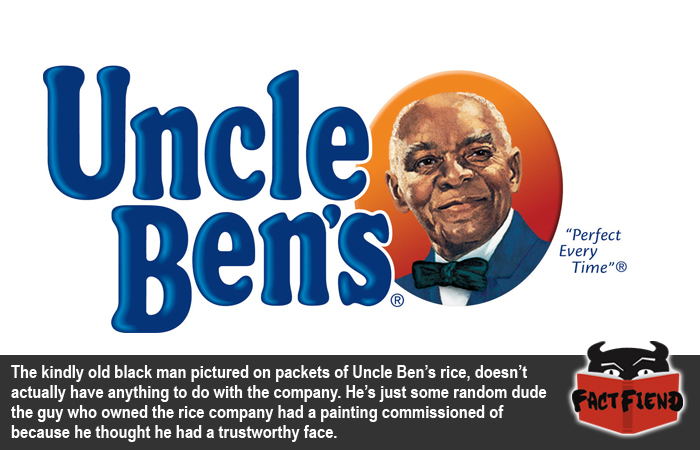 This article can now be found in video form, literally right below this sentence.

If you’re not a fan of videos, feel free to check out the original article below.

For decades, the visage of a kindly old man has been selling instant rice under the moniker of Uncle Ben. Weirdly though, the guy on the packet isn’t Uncle Ben, he’s just some random guy who worked in a hotel.

More specifically the man on the packets was a maître d’hôtel at an unknown Chicago restaurant in the mid 50’s called Frank Brown. This restaurant was frequented by a guy called Gordon L. Harwell who owned a company that supplied pre-cooked rice to the masses under the name Converted Rice inc, which just rolls of the tongue, doesn’t it?

After supplying rice to the Allies during WW2 and receiving positive feedback on its quality, Harwell was looking to expand his business and sell his rice to the public. However to do that he needed two things, a better name and a trustworthy face he could slap on the front of his packaging. Enter Frank Brown.

The latter of those things came in the form of the aforementioned Frank Brown, whom Harwell and his business partner were supposedly good friends with. After basking in Brown’s warm, grandfatherly glow for countless minutes, the pair offered him a small sum (some sources claim as little as 50 dollars) for the exclusive use of his likeness forever. Brown, not fully understanding just how popular the brand was going to be, agreed and a portrait was quickly commissioned.

As for where the name “Uncle Ben” came from, he was actually a real guy. As noted here, Uncle Ben was a famous rice farmer from Texas famed throughout the states for the quality of his rice crop and being Spider-man’s great uncle or something.

Apparently Uncle Ben wasn’t that famous because even today, historians still aren’t sure what his surname was. Also, while we’re at it, the only reason he was referred to as “Uncle Ben” instead of say, “Mr Ben” or the far more apt, “Rice King” is because back then white people were torn between not wanting to call a black person “Mr” or heaven’s forbid, “Sir”, and not wanting to disrespect an elderly person. As a kind of shitty compromise most people settled on referring to elderly black people as either Uncle or Aunt. Thus, Ben, who was like Frank Brown was also a kindly older black gentleman who also made kick-ass rice, became known as Uncle Ben.

After hearing about this legendary rice pimp, Harwell renamed his company, Uncle Ben’s Converted Brand Rice to coast on the goodwill surrounding the name and slapped Frank’s face right on the front of it (because all black people look the same to white people when they’ve got rice on the mind) and promptly began making millions of fucking dollars selling it. Sadly, little, if any information exists about what happened to Frank Brown after he became the face of Uncle Ben’s rice so we’re forced to assume that spent the rest of his days either slapping people aside with comically huge bags of rice sporting his image, or that he died penniless while some dickhead using his likeness became a millionaire.