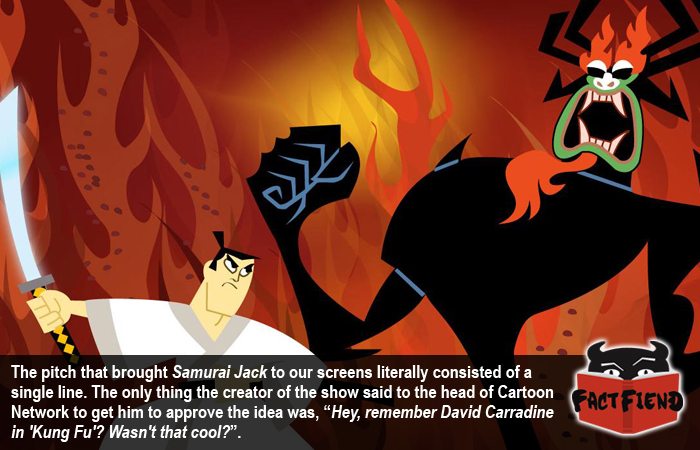 If you’ve never seen Samurai Jack, stop reading this and go watch it on Netflix right now, if you don’t have a Netflix account, just email customer support telling them you haven’t seen an episode of Samurai Jack and they’ll give you a month long trial for free so you can marathon the first season. For everyone else, this is the awesome story of how the show made it to air in the first place.

As described above, the “pitch” that got the concept of Samurai Jack approved by Cartoon Network literally consisted of the show’s creator, Genndy Tartakovsky, asking the head of programming at the network how bitchin’ he thought Kung-Fu was. When the head of programming agreed with Tartakovsky that Kung-Fu was indeed, “the tits” the only person left to convince about how awesome the show was going to be was Brad Siegel, the head of the Turner Entertainment Network.

Weirdly, Siegel was less than enthused with Tartakovsky’s bare bones pitch and upon seeing an episode his only response was a very curt, “It’s a little slow, isn’t it?“. Knocking the wind out of Tartakovsky’s sails faster than a cannonball made of Mike Tyson uppercuts. However, there was still hope because Siegel wasn’t the kind of man who was going to turn down a pitch for a children’s show without first showing it to some children. Luckily for him he had a couple of them lying around at home.

Siegel’s children, demonstrating much finer taste in cartoons than their father, didn’t share his scepticism about the pacing or style of the show and instead gave it a couple of child-sized thumbs up. Siegel’s children reacted so strongly to the show and the character of Jack in general that he was forced to completely rethink his position on green-lighting it. The next day he walked into his office and told Tartakovsky that he could start making episodes so that his kids would shut the hell up about when they could see more of Jack.

And that ladies and gentlemen is how Samurai Jack defeated his toughest foe and fought his way onto our screens.