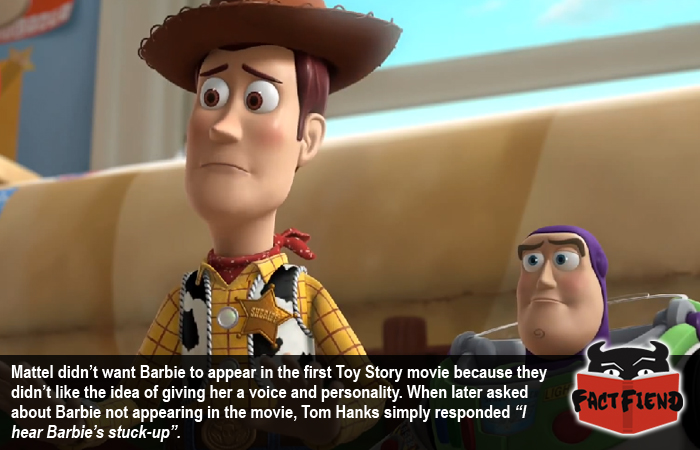 The Toy Story franchise has earned more money for Pixar and Disney than Mickey Mouse underwear and Monster Inc onesies combined. However, when they were presented with the chance to have Barbie star in the movie, Mattel refused, luckily Tom Hanks was on hand to verbally slap them right across the god-damn face.

According to executives from Mattel, they didn’t want Barbie to appear in the movie because they felt that they couldn’t in good conscious let their character star in the movie because it would mean allowing the the film to give Barbie a solid identity and voice. They argued that every little girl who played with a Barbie projected their own personality onto it and as such, they didn’t want the movie to give her a voice that could potentially differ from the idea of Barbie’s “true voice” that a girl somewhere had given her. Which is kind of sweet. Stupid but sweet.

After realising that they couldn’t get the most famous female doll of all time into their movie, the guys at Pixar instead decided to include a generic Little Bo Peep porcelain doll, which they reportedly preferred because Bo Peep is awesome.

When asked to comment on the inclusion on Bo Peep instead of Barbie, Tom Hanks (the voice of Woody) was highly critical of the character of Barbie in general. Along with suggesting that she’s “stuck-up”, which she probably totally is considering that fact you have to buy her friends, he argued that Bo Peep was a much better female character because she knew was real sacrifice was, because she’d lost one of her sheep.

We’ve included the entire quote below because, damn does Hanks slap down Barbie’s shit. Bo Peep for life!

“I hear Barbie’s stuck-up.Those good-looking women—you can’t talk to them, nothing has truly been expected of them. Bo Peep, she works hard out there with those sheep, she lost one of them, so she knows what sacrifice is. She’s actually a much better conversationalist”