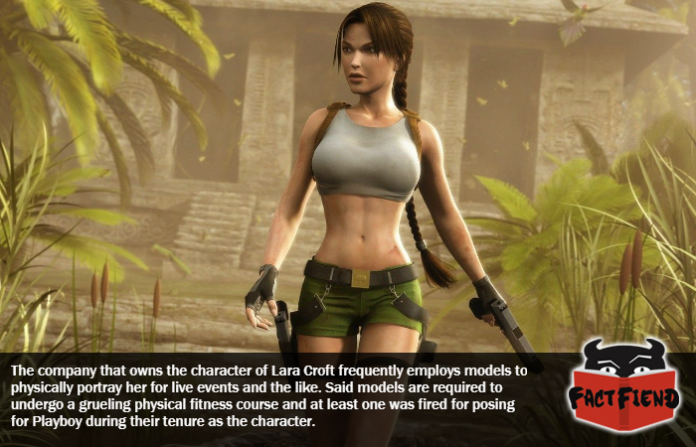 Lara Croft is one of the most famous fictional women in the world and, as we’ve discussed before, she’s accomplished a lot during her storied video gaming career. However today we’re talking about something the character did here, in the real world. Mainly getting fired for posing for Playboy.

A sentence which requires probably some explanation, so allow us to do exactly that and talk about one of the weirder jobs tangentially related to the gaming industry. Being Lara Fucking Croft. 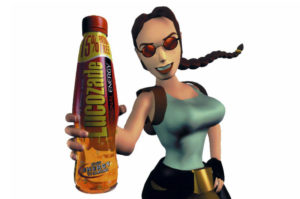 You see, almost since their inception in the 1990’s, the Tomb Raider games Croft hails from have featured her prominently in their marketing. The problem is, being virtual, Croft’s ability to physically interact with the public is limited. Luckily a solution was found in the form of glamour models, who the company producing the games realised could be dressed up to look like the character for events and shit like that.

Now while initially the models tasked with physically portraying Croft were hired for individual events, the popularity of the character resulted in it becoming a salaried position with a host of perks and benefits. In addition to a number of rather, unusual requirements. For example, because Lara Croft is supposed to be a consummate badass capable of effortlessly scaling mountains and fight dinosaurs, models playing her are sent to Lara Croft bootcamp where they train with the SAS in things like weapons handling and acrobatics. The idea being that the model should not only look the part, but also be capable of doing anything the character does in-game. 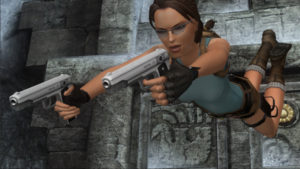 Models are also given elocution lessons so that they can speak with Croft’s trademark British accent as well as how to carry themselves with the same air of confidence as the character. In return, models are paid a bunch of money to travel the world whilst pretending to be a fictional archaeologist that backflip kicks tigers to death.

However, the position does come with some caveats, one of which is that there’s, we shit you not, a morality clause, which we know about thanks to one Nell McAndrew. A former model who portrayed Croft in the late 90’s and was famously fired when they posed for Playboy. Something it is worth noting the company that owned the character didn’t mind at first until that particular issue of Playboy came out with the words “LARA CROFT HOT NUDE PICTORIAL” on the cover. 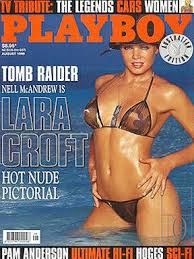 As you might imagine, the company didn’t like this and, in addition to threatening Playboy with a lawsuit, fired McAndrew for good measure for making Lara Croft look bad. McAndrew, to her credit, didn’t really give a shit about this as she assumed she was going to be replaced anyway when they released a new game, because, according to her “that’s what they always did” and she was just happy that playing the character got her a bunch of free holidays and 24 hour access to a gym. Which, well, sounds exactly like the way we’d expect Lara Croft to spend the majority of her time if she was real.