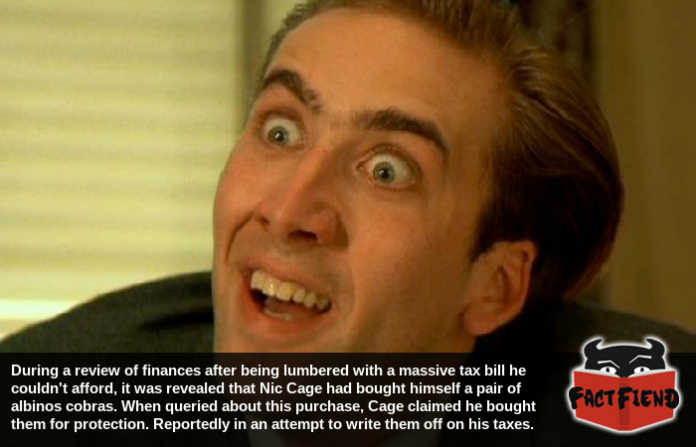 It’s reported that, at the apex of his career, Nic Cage spent an inordinate amount of cash on a bunch of dumb bullshit largely, just because he could. Something that ended up biting the actor in the ass when the IRS slapped him with a massive fine for unpaid taxes. A fine Cage tried to minimised by attempting to write off, amongst other things, a pair of albino cobras and an octopus.

If you’re currently wondering what the fuck we’re talking about, in 2009 Nic Cage found himself staring down the barrel of a shotgun aimed squarely at his wallet’s balls wielded by the IRS. Why? Well it would later emerge that Cage owed the IRS around $6 million in unpaid taxes, money he didn’t have due, in part, to a number of poor investments and Cage’s propensity for buying weird shit. 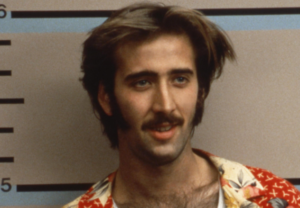 For example, Cage frequently spent hundreds of thousands of dollars on stuff like rare comics, dinosaur bones and classic cars. And while, yes, that last one doesn’t sound all that strange, we should note that Cage bought the cars not to drive, but to display in his billiards room. Cage also bought a couple of castles, a private island and a haunted house, all of which he was forced to sell at a huge loss when the tax man came knocking due to this bout of financial misfortune striking right in the middle of the housing market imploding.

As you might imagine then, Cage was very keen to find something, anything he could claim as an expense to which is when he remembered his pet albino cobras. You see, Cage is a big animal lover and prior to finding himself in the cross hairs of the IRS, he’d bought a zoo’s worth of random animals including the aforementioned cobras called Moby and Sheba for a cool quarter million dollars. These cobras in addition to being incredibly rare, were also, for some inexplicable reason, still capable of biting and killing a man because Cage never had them defanged. Instead Cage just bought several vials of anti-venom and kept it next to their enclosure.

A fact Cage tried to use to defend his purchase of the animals, arguing that he needed them to protect his home. 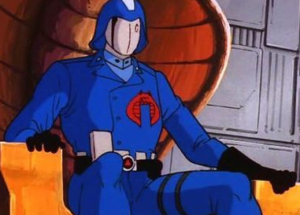 If you’re wondering how in the fuck two cobras locked inside of a specially constructed enclosure could protect a person’s home, well according to Cage the cobras frequently tried to hypnotise and attack him. So we guess they’d do that. Cage also asserted that he would study the cobra’s movements to inform his acting, claiming he based some of his movements in character as Ghost Rider on those of Moby and Sheba. A fact many reported as being just another example of Cage’s famously eccentric personality but more cynical folks pointed out may have been a sly attempt to write the animals off on his taxes.

A claim supported by the fact Cage made the exact same claim about an octopus he bought for $150,000. Again, while this does sound like something Nic Cage would do, it was similarly pointed out that this may have been another attempt from the actor to justify such an outlandish purchase and more importantly, write the amount he paid off on his taxes. Our favourite part about this story being that we actually can’t decided which part we’d rather turn out to be true.