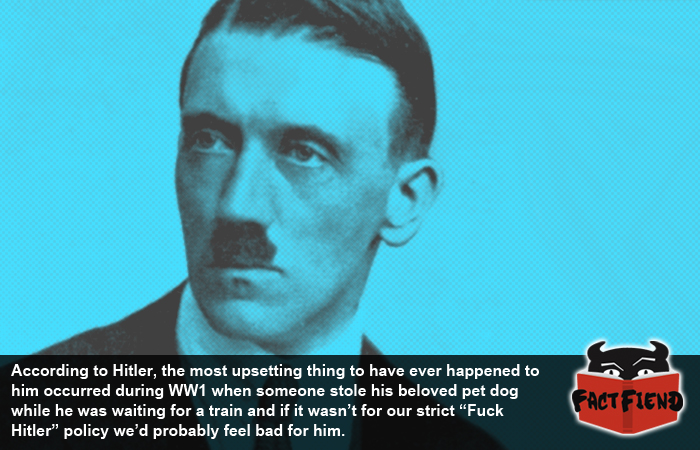 There’s a thought experiment that has floated around the internet for a while that posits: if you were to travel back in time and were presented with a chance to steal Hitler’s wallet with the guarantee you’d get away with it but would otherwise have no effect on how WW2 played out, are you morally obligated to ruin Hitler’s evening and steal the fuck out of his wallet?  While we’ve no proof that this has ever happened, we do know that someone did something remarkably similar when they stole his dog.

As anyone with a passing interest in WW2 likely already knows, Hitler was loved him some animals to the point one of the first things he did upon assuming power over Germany was pass comprehensive animal welfare legislation to ensure animals in Nazi Germany wouldn’t be mistreated or killed in an unnecessarily cruel way. Before you ask, yes, we’re still talking about the same Hitler who didn’t bat an eye at the thought of committing genocide against an entire race of people. Hitler, like all of us was a complex man who held seemingly contradictory values that through what must have been superhuman levels of mental gymnastics, he was able to hold simultaneously, which is why we have this picture of him gingerly feeding some baby deer at around the same time Jewish people were being slaughtered en-masse on his orders.

The animal Hitler arguably had the softest spot for were dogs, the most well known of which is his pet German Shepard, Blondi whom he trained to perform a number of tricks because Hitler apparently had a lot of time on his hands.

But Blondi wasn’t the only bitch in Hitler’s life with it being known that Hitler owned almost a dozen dogs over his life, including an awesome hero dog he found wandering around fucking no man’s land and decided to adopt the shit out of called Fuchls. Like many of his dogs, Hitler trained Fuchsl to perform, according to a direct quote from him, “all the tricks” and he was well liked by all his comrades in the trenches, as this photo of Hitler posing awkwardly with him and his friends probably demonstrates.

Hitler’s love of little Fuchls was such that he once joked that the only reason he survived WW1  was to find his four-legged friend a “female companion” so that he could get his fuck on and took him everywhere with him. Which leads us to the fateful day Fuchls was stolen by an unknown, presumably large-donged hero of history.

According to Hitler himself when he later recounted the story of Fuchls’ disappearance, while travelling via train with Fuchls, he was accosted by a conductor impressed by the dog’s repertoire of tricks and ability to busy consistently and throughly who wanted to purchase him. When Hitler told the conductor to screw off, presumably while making a mental note to send burly men to kick his ass if he ever assumed total and unchecked control over all of Germany, he chased Hitler through the station to his cabin and doubled his offer. Hitler, again, told the conductor to go away, insisting that his friend wasn’t for sale. A few minutes later, Fuchls was gone. Hitler, as you’d expect, never stopped being angry about this to the point that two decades later he still shook with rage and probably cried a little whenever he recounted the story.

As we said in the accompanying image macro to this article, we’d feel bad about this but fuck Hitler.