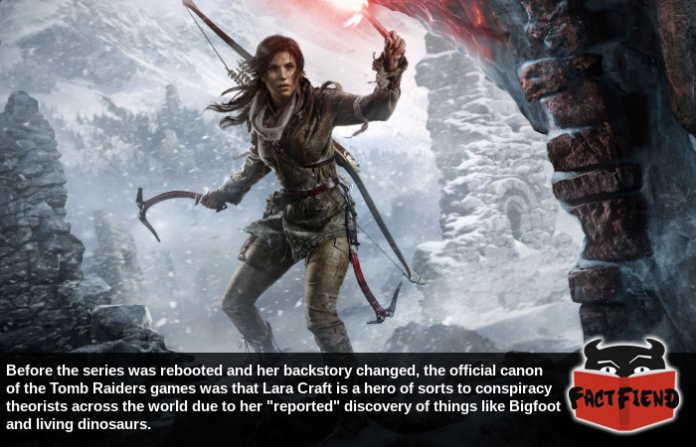 The original Tomb Raider games weren’t exactly paragons of realism, what with all the all the yeti’s main character Lara Croft shoots to death. Amusingly though, according to the series’ official canon Croft is well aware of how stupid her adventures are and as a result, actively refused to talk about them to the press.

You see, for anyone who hasn’t played the original mainline series of Tomb Raider games or simply doesn’t remember how stupid they were, allow us to recap. During the course of the original series of games Lara Croft is credited with discovering everything from the Arc of the Covenant to the Spear of Destiny, the former of which she keeps in her training room as a fucking doorstop. 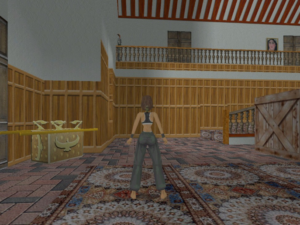 In addition, as if discovering multiple ancient relics rumoured to be nothing but myth wasn’t ridiculous enough, during the games Croft encounters and then shoots to death dinosaurs, yetis and even a big-ass dragon at one point. Not content with re-extincting the dinosaurs Croft also breaks into Area 51 in one game and backflips over the corpse of an alien. 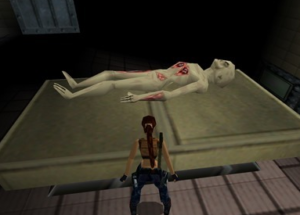 The thing is, in the context of the Tomb Raider games, none of these world-changing discoveries are ever publicised by Croft herself who seems content to keep herself to herself. In fact, according to her official biography released by the makers of the games, Croft actively refuses to acknowledge stories about her exploits. Something that has apparently resulted in numerous “unofficial” biographies of Croft being published within the Tomb Raider universe. Biographies that include details of her doing shit we, the players, know for a fact happened for real like slapping mummies and performing twirling handgun combos on UFOs.

Again, according to the official biography of this iteration of the character, Croft goes to great lengths to silence and distance herself from these stories despite the fact we know they’re true. We mean, you literally have to control Lara in one game as she genocides an army of yetis in one game. Hell, in the very game in the series Lara is tossed a magazine alleging that she discovered and killed Bigfoot years prior. Meaning from the moment you very first take control of Lara Croft, you’re playing a character who’s already probably shot Bigfoot to death in cold blood.

Hilariously, within the Tomb Raider universe it’s noted that Lara Croft is a hero to conspiracy buffs who believe in shit like aliens and ancient relics with magical powers. Which makes sense if you think about it, we mean, these people are 100% correct to believe in this stuff considering Lara Croft has the Arc of the fucking Covenant by her front door.