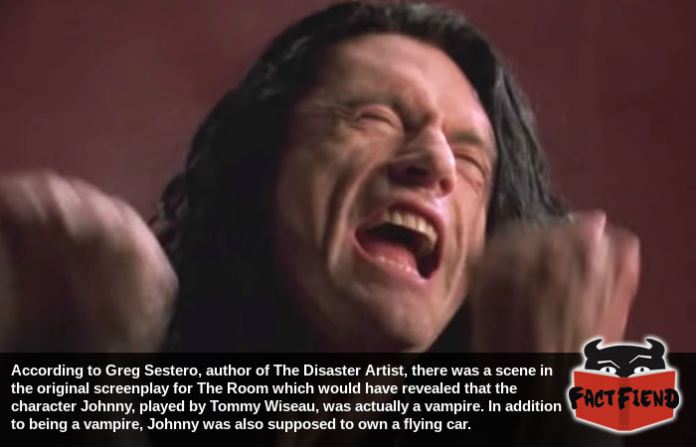 The Room is, depending on who you ask, a work of film making genius or a cinematic turd that fell into a bowl of glitter after it was released on DVD. Simultaneously heralded as a comedic masterpiece and one of the worst movies ever made, the film is infamous for it nonsensical, virtually unintelligible plot. A fact made all the more impressive when you realise it very almost contained a scene with a flying vampire car.

First though, for the uninitiated, The Room is theoretically a movie about a love triangle between a wealthy large-penised banker called Johnny, his wife and his best friend. However due almost entirely the the frankly heroic ineptitude of director Tommy Wiseau, the film is actually one of the most unintentionally hilarious pieces of fiction ever created. 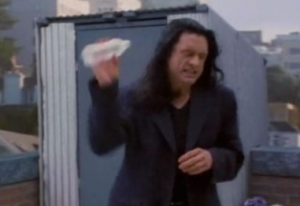 Literally every aspect of the film from the sound to the cinematography to the acting has been criticised since the film’s release in 2003 to the point there isn’t a scene in the film that doesn’t have at least one mistake. For example, every other line in the film is dubbed due thanks largely to the fact that Wiseau – who stars in the film as the aforementioned large-penised banker – decided that he didn’t like any of his lines during post-production and re-recorded all of them. Other mistakes include extras looking directly into the camera and waving, spelling errors in the credits and objects that randomly move between scenes.

The film is also well known for it’s frequent, inexplicable tonal shifts and near-constant introduction of plot threads that are never resolved. Arguably the most famous example of the latter being a moment in the film where a character reveals that they have cancer and promptly never mentions it again. 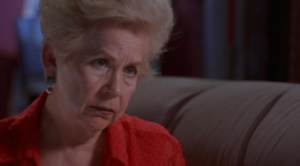 Behind the scenes the making of the film was just as much of a clusterfuck with Wiseau reportedly firing and replacing every actor and member of the crew at least 3 times during production as well as refusing to do basic things like get permits to film. Wiseau also inexplicably decided to film the film using both a digital camera and one that used 35mm film, strapping them both together and in effect, filming every single scene twice. Wiseau has never been able to adequately explain why he did this and it’s reported that he only used the footage obtained from the camera that used film.

Now ordinarily a film this bad would be relegated to the collective bargain bin of the public consciousness. However, the film sucks such an immense amount of ass on every conceivable level that it has since been regarded as an unintentional masterwork of cinematic genius. In short, the film failed so hard and so completely that you kind of have to respect it. 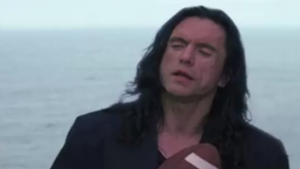 Wiseau has since tried to backpedal a little and now claims that he intended to make a shitty movie all along, describing the film as a black comedy. However, interviews with cast and crew members have revealed that Wiseau, in all likelihood, stumbled ass-backwards into making comedic masterpiece and that some of his more, eclectic ideas had to be scrubbed from the script.

For example, according to Greg Sestero, who not only acted in the film but served as a confidant to Wiseau during its production, the director was insistent on including a plot thread in the movie that would have made it fucking amazing. Vampires. 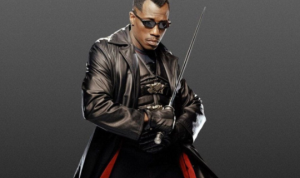 Specifically after bemoaning to a producer that a scene depicting a confrontation with a drug dealer wasn’t dramatic enough, Wiseau asked if it would be possible to use CGI to have the climax of the confrontation be his character’s car flying off into the sky. The stunned producer simply asked Wiseau “but why though?” to which he responded “maybe Johnny is a vampire“.

As you’ve probably gathered given everything else we’ve said about him today, Wiseau never saw fit to explain to anyone on set why owning a flying car would suggest that his character was a vampire and had to be talked out of including the scene by Sestero. Wiseau eventually relented, though not before suggesting that they spice up the scene by having one of the actors fire an actual real handgun into the sky. When it was pointed out to Wiseau that this was all kinds of illegal he relented and instead gave the actor an airsoft replica pistol and told him to use it to scare the shit out of the other actor in the scene as he mugged for the camera. 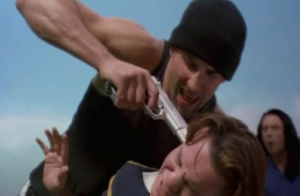