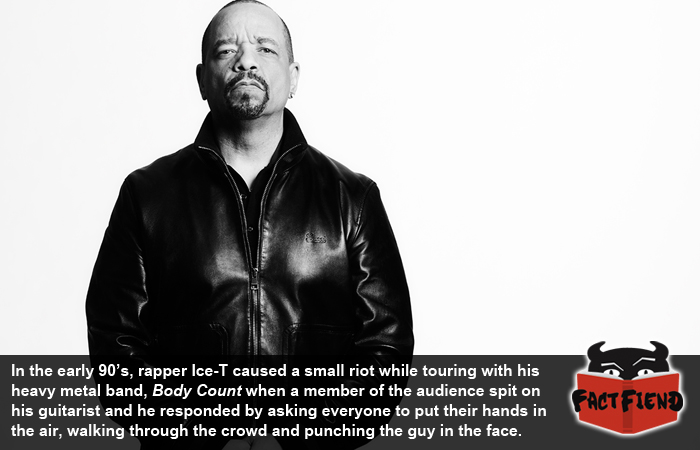 Depending on how “street” you are, you either know Ice-T as that guy from Law and Order: Special Victims Unit the big-dick O.G of gangsta rap or a refreshing summertime beverage that’s suspiciously sweet for a liquid that’s pale brown in color. But did you know he’s also been the front man for a heavy metal band for like 30 years and that he once almost caused a city-wide riot at one of his first ever international gigs.

That band is Body Count, a side-project of sorts Ice-T formed in the 90’s with long-time friends Ernie C and D-Roc the Executioner, who we’re not even going to bother looking up the real names of because holy shit do we want an excuse to keep typing D-Roc the Executioner and know we’re getting paid for it. Despite cutting his teeth in the music industry as a rapper, and a really fucking good one at that, Ice-T has always had a fondness for heavy metal, going as far to cite Black Sabbath as one of his favourite bands of all time.

For anyone thinking that this band is probably some cynical plot on Ice-T’s part to make money from angry white kids with his rap albums and even angrier white kids with his metal albums who doubts how much he actually cares about the genre, firstly Ice-T would probably have a few choice four letter words for you, secondly, here’s a picture of him with the closest thing metal has to a god, Lemmy.

Ice-T has always maintained that his love of metal is genuine and that he doesn’t believe in confining himself to one genre, once quipping that if he could actually sing instead of spitting caramel smooth rhymes he’d probably be in a boyband too. In regards to critics accusing him of “selling out” Ice-T’s usual response is to tell that person to go fuck themselves before adding that he feels sorry for the type of people “who only listen to one form of music“, a burn so sick we’re surprised he didn’t save it for one of his albums.

In keeping with the spirit of heavy metal, Ice-T has proceed to give less than the weight of one shadow of a fuck about what his critics think and has toured with the band on and off for nearly three decades, releasing a handful of albums about telling people to suck their collective dicks and generally kicking ass wherever they go, quite literally in the case of one show in Milan.

The show in question occurred in 1992 shortly after the release of Body Count’s self-titled debut album. Immediately prior to the start of the sold-out show, Ice-T took to the stage with an unthinkably reasonable request for fans in attendance, “Please don’t spit on me while I’m performing“. You see, back then it was apparently quite common for punk fans to spit on their favourite bands because nothing is apparently more punk rock than hepatitis. Knowing this and knowing that many punks listened to their music, Ice-T went on stage to inform the audience that he was absolutely not about that.

Despite making the most reasonable request of any rock star in history, a member of the audience ignored Ice-T’s pleas and spit all over his guitarist and close friend, Ernie C. Livid, Ice-T asked Ernie to point out who’d spit on his face and once he had a clear view of the guy, he asked the crowd to put their hands up like they just didn’t care. With the entire crowd now standing nearly totally motionless with their hand as far away from their faces as possible, Ice-T walked into the crowd and socked the guy who’d spit on Ernie right in the fucking mouth. The sucker punch ended up causing a riot to break out as angry fans clambered to attack Ice-T for daring to defend his friend by punching an asshole who thought it was okay to spit in someone’s face in his mouth. Fearing for their lives, the entire band fled the building, stole a taxi and made a beeline for their hotel to hide under some coats until the whole thing blew over.

But blow over it didn’t and several prominent Italian media outlets slammed Ice-T for his actions, until he went on an Italian radio station and explained what happened, at which point virtually everyone’s opinion on how much of an asshole he was changed. As is wont to happen when it’s revealed you didn’t randomly attack a fan, but were merely asserting your right to not have people spit in your fucking face. After the radio DJ assured everyone Ice-T was a cool guy just trying to entertain some fans and noted that the guy he punched probably deserved it, opinions softened and the band continued their tour without further incident.