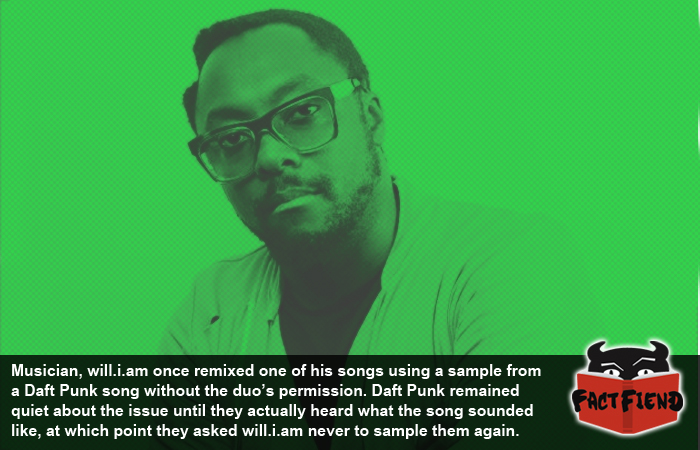 Here at Factfiend we have a lot of respect for Daft Punk, if only because they have the balls to walk around dressed as cool robots. Which is why we’re kind of excited to tell you about the time they told will.i.am to go fuck himself when he tried to sample one of their songs without asking.

Sampling for the people reading this not currently wearing an NWA t-shirt, is the act of taking part of a song – usually the hook or a section of the chorus – and putting it into another song, in theory making a much cooler song and potentially giving the sampled song’s popularity a shot in the arm. It’s an established part of music that is especially prevalent in rap and electronic music, but can also be found in nearly every other genre. While the legality of sampling is somewhat controversial, most artists tend to be cool with it as long as you ask them, which seems super reasonable and not at all difficult for someone with millions of dollars and industry connections to do. Enter will.i.am.

In 2007 will.i.am decided to remix one of the songs from his third solo album called I Got It from My Mama, promising fans that it would blow their mind. The remix as it was basically the lyrics of the original song layered over the main and only hook of Daft Punk’s Around the World. will.i.am even shot a new video for the song, that doubled down on the Daft Punk influences by “borrowing” visuals from several of Punk’s videos and basically ripping off the aesthetic of the actual video they released for Around the World. The remix relies so heavily on Daft Punk’s iconic hook, that will.i.am begins screaming the words “Believe it or not, this is a remix” 3 seconds after the song starts as a kindness to people who might hear the intro on the radio and think they’re listening to Around the World allowing them to turn it off and go about their day.

If you think we’re being unnecessarily mean to will.i.am, we should point out that at no point during the process of “remixing” his song or making his video did he think to reach out to Daft Punk and ask their permission if it was okay to sample their song. We mean, it’s not even like that would be hard to do, they’re fucking robots, we wouldn’t put it past them to have those suits they wear all the time connected to the internet. While we’re on that subject, what exactly was his end goal with this song? Did he think Daft Punk would be flattered? That they’d think him screaming like a jackass over a song they’d spent months tinkering with was an improvement? That they’d remove their helmets to say that he wasn’t a total shithead?

We never found out the answer to any of these questions because will.i.am never explained why he used the sample or why he figured he could get away with not asking permission of the two most respected robots in music. The only explanation we can think off is that will.i.am was taking part in an experiment to see if robots have the ability to understand the concept of plagiarism, which must have worked because as soon as the song was released the duo unsurprisingly told him to cut that shit out. Apparently stating that they felt that their music sounded better without him in it.

What made this whole thing strange is that will.i.am got off relatively easy, with the duo simply asking that he simply not release the song and never contact them again when they probably had a pretty strong case to sue his ass, because this wasn’t exactly the first or sixth time will.i.am has been accused of trying to rip off another person’s song and pass it off has his own, it was just the most brazen.

will.i.am continues to make music whereas Daft Punk continue to not give a monumental shit about the anything mentioned in the first part of this sentence.