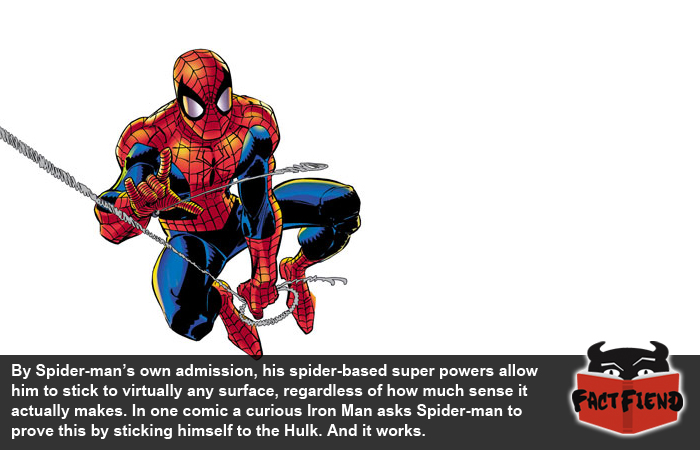 You know the drill if you check this website periodically, another article has been turned into a video.

As per usual, if it’s not your thing, the original article is below.

The bulk of Spider-man’s super powers are fairly easy to explain as his theme song is only to happy to demonstrate, basically anything a spider can do, Spider-Man can do too. One of Spider-man’s more mundane powers is his ability to stick to walls like a spider, however, few people realise how powerful this singular ability has the potential to be, Spider-Man included.

For starters, Spider-man comics have made it abundantly clear that removing Spider-man from a surface against his will is virtually impossible and in the rare cases an opponent is somehow able to dunk him into the asphalt, bits of the surface he was just hanging from can normally be seen still attached to his fingers even if Spider-Man is ripped from the surface by a being with superhuman strength. According to the Marvel wiki, exactly how much weight Spider-man is able to support using nothing but his wall-clinging ability and even how it works isn’t fully understood, however it is noted that he can comfortably support several tons of weight with a single finger tip. Meaning if he really wanted to, Spider-Man could flip you the bird with a taxi glued to the end of his middle finger, upside down.

What makes Spider-Man’s wall-clinging power really scary though is that he seems to have mental control over how it works, seemingly being able to attach and unattach himself to a surface at will. Why is this scary? Well, there was an arc in the comics in which someone created a bunch of dickhole Spider-Man clones, one of which went around using his wall-clinging power to slap people in the head and rip huge chunks of their face off with his finger tips.

Remember, this clone had all of the abilities of the regular Spider-Man, which means it’s reasonable to assume that Spider-Man could easily do this too, but chooses not to because there’s no fucking way to spin ripping people’s faces off with your bare hands in a positive light unless you only use it to attack people who look like Hitler or something. But here’s the best part, Spider-Man’s wall-clinging ability isn’t just limited to his hands and feet and he’s actually able to stick to a given surface using any part of his body. There are actually several examples of Spider-Man sticking people to his back in the comics as well as times where he’s stopped people removing his mask by using his powers to stick it to his face. Basically, every time Spider-Man makes skin to skin contact with another human being, or even makes contact with them through his suit, he’s making a conscious decision to not tear the flesh from their bones, and this is a superhero who’s most iconic live-action scene is him kissing someone.

In terms of the limits of what Spider-Man can stick to, that tends to vary from writer to writer, that said Spider-Man is almost universally shown as being able to stick to glass and windows without any apparent effort, a feat only a handful of creatures in the entire world can match, one of which possess feet so sticky you could literally use it to climb up the side of a building made of Teflon pans.

In one comic, the idea of whether there was anything Spider-Man couldn’t attach himself to was explored by none other than Tony Stark, who straight up asks the wall-crawler if he’d be willing to test the limits of what he can do when he tries to push Spider-Man off of a window and notices that he doesn’t move at all. Prompting Spider-Man to proudly exclaim that he can stick to EVERYTHING, and that he’s more than willing to humor any challenge Iron Man might have.

Upon hearing this, Stark challenges Spider-Man to stick to the Incredible Hulk, who is inexplicably sat on the sofa calmly eating a slice of pizza as all of this is taking place, seemingly unaware that Iron Man is daring a human-sized spider to moonwalk along his biceps.  This results in one of the single greatest scenes in comic history involving the Hulk since the one where they turn him back into Bruce Banner by showering him with puppies. 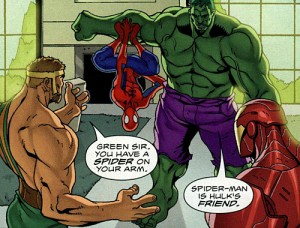 We really hope they somehow manage to fit this scene into that Civil War movie they’re making.