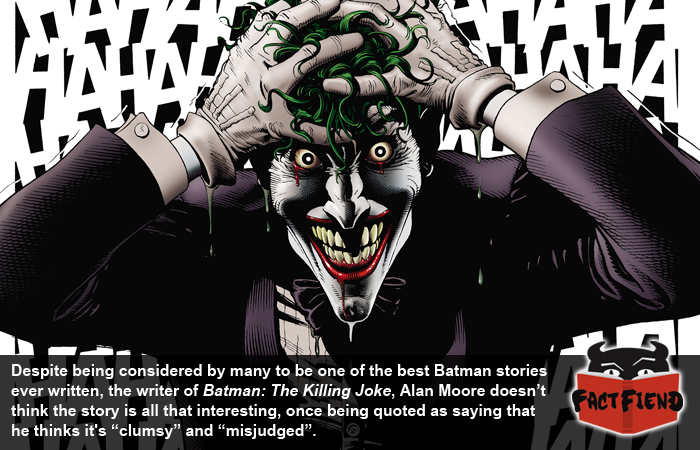 To many, Batman: The Killing Joke, alternatively known as Batman: Danger Laugh Time to people who ran the title through Google translates 30 times in a row, is considered by many to be the definitive origin story for the Joker and is widely regarded as being one of the best comics ever written by fans, critics and people with eyes. This said, the comic does have one rather vocal critic. The guy who wrote it, Alan Moore.

If you’re not familiar with the comic or Alan Moore, please allow us to fill you in. Alan Moore is a wild-eyed, Rasputin looking motherfucker who worships a kick-ass snake god called, Glycon and has spent the better part of the last 20 years learning to be a wizard. All things that we’re amazingly, not making up.

Throughout his career as a comic writer Moore has penned some of the medium’s best known and critically acclaimed works including Watchmen, V For Vendetta and the story we’re talking about today, Batman: The Killing Joke. In regards to The Killing Joke the story essentially gives an origin story for one of Batman’s most enduring villains, the Joker, explaining that he was actually just a normal, albeit shitty comedian who had “one bad day” that turned him into a mass-murdering clown with inexplicably perfect teeth.

The story continues and shows the Joker trying to prove that even the most honourable, badass and moustachioed man could similarly be driven insane by having a day as shitty as the one he had when he fell into a vat of toxic chemicals on the day his wife and unborn child died. Something he attempts (and fails) to accomplish by shooting Commissioner Gordon’s daughter in the fucking spine and forcing him to look at pictures of it while people laugh at him. Also Gordon is stripped naked, forced to wear a collar and tortured by a giant baby wearing a dress for reasons we’re sure are super important to the story.

Although the story just a one-off, several elements were ultimately folded into what was then, DC canon, most notably the shooting of Gordon’s daughter, who was paralysed by the attack and forced to give up being Batwoman. In later interviews, Moore expressed regret over this particular story element and explained that that DC executives were hilarious apathetic about the characters plight, supposedly telling him to “cripple that bitch” when he asked if it would be okay to have one Batman’s closet allies shot in the spine in his story. DC couldn’t have shown less regard for their character if they’d sold the exclusive rights to make movies about them to Fox, and at least if they’d done that, only about 40 people would have seen what an embarrassing shit-show the whole thing was. 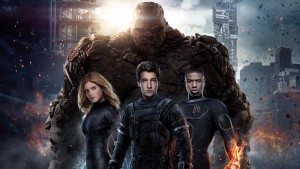 In addition to this, Moore has also made it clear than he straight up doesn’t think the story is all that interesting, calling it “clumsy” and ultimately devoid of all emotional depth or substance because neither character it centred around was realistic. Perhaps Moore’s most brutally honest quote about the story though was that he felt that it was just “about a couple of licensed DC characters that didn’t really relate to the real world in any way“, adding that to him, The Killing Joke wasn’t a very good book. For a while this quote was considered the hardest anyone had ever publicly shit on Batman’s character right until Zack Snyder started making movies about him.

As if that wasn’t bad enough, the guy who drew the damn comic, Brian Bolland, also expressed in interviews that he didn’t think the art was all that great either, explaining that due to scheduling issues, they brought in another colorist who made the comic look like a pack of skittles had, had an orgasm over each page and made Batman look like a Simpson’s character in half his panels. Something that pissed him off for 20 fucking years until the 20th anniversary of the comic, for which he was allowed to color it the was he’d originally intended. 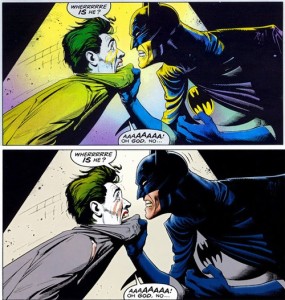 In other words, Batman: The Killing Joke, a comic considered by critics to be one of the best ever written, is disliked by both the guy who wrote it and the guy who drew it.