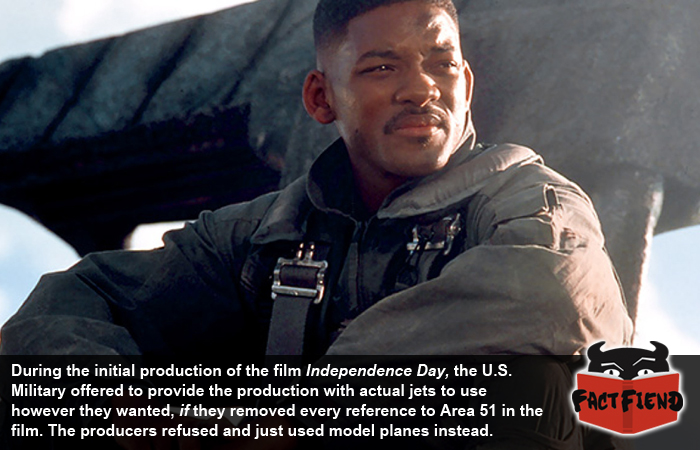 As we’ve talked about before, the U.S. Military is pretty media savvy and they have a dude whose sole job is liaising with movie studios and directors (but mostly Michael Bay) about lending them equipment to lower the cost of filming, so long as they massage the military’s balls a little and don’t make them look bad on screen. Apparently though, the military also isn’t above demanding that studios make changes to their script, regardless of how essential they are to the plot.

As noted in the image above, when the military first got wind of Independence Day and heard that it’s central plot was  basically”America saves the world so hard everyone becomes American” they got in contact with the studio because they just had to get in on that shit.

According to the DVD commentary for the film, the military were initially incredibly supportive, offering to provide everything the studio could possibly need from actual jets to experts that brief actors playing military roles on how to talk, act and cold-cock an extra-terrestrial.

However, their attitude soon changed when they actually read the script, and realised it contained numerous reference to and an extended scene set inside of, Area 51 at which point their patriotism-boner suddenly subsided and was replaced by a cold sweat and encroaching sense of shame.

The military gave the studio an ultimatum, either cull all of these scenes and every reference to Area 51 from the film or they’d totally withdraw their support. The studio incredulously refused this kind offer, explaining to the military official liaising with them that, the scenes set in Area 51 were sort of integral to the plot.

With the military refusing to budge on allowing the filmmakers to include references to a place the government itself has already admitted exists since the the 80’s, the crew were left with no choice but to just go it alone. Since they couldn’t get their hands on any of the military’s fancy-ass jets, the crew made do with a singular working unit, which they used camera trickery and visual effect to put into as many shots as they could, duplicating it multiple times to make it look like they actually had hundreds of jets instead of one. When this wasn’t possible they just used model planes and made them look all big and stuff by filming them up close, like this.

In fact, according to the film’s supervisor of models, Michael Joyce, the film probably used more miniatures than any other film in history, which probably wouldn’t have happened if the military had let the production use any of their toys.

In other words, half of the awesome shots in this film are a direct result of the U.S. Military getting super-pissed that a movie mentioned Area 51 and taking their ball home and the production crew being all, “we’re still gonna fill this bitch with jets and explosions without you”.