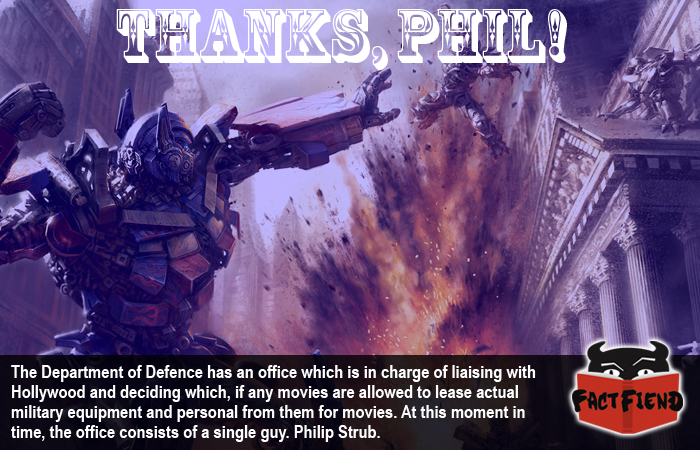 If you’ve seen an American made movie featuring military equipment in the last 25 years, it’s practically guaranteed that Philip Strub had something to do with it. This is because Strub is the entertainment liaison at the Department of Defence, which is basically just a fancy way of saying he’s in charge of who gets to play with the tanks.

That’s not hyperbole, Philip literally represents the opinion of the entire freaking military, if he doesn’t think a movie is going to portray the military in the right light, or he doesn’t agree with its vision, they can’t lease anything from the Department of Defence. There is of course nothing stopping them from procuring their own equipment or just using special effects to achieve the same effect, but in practically every case, this would end up costing millions, if not tens of millions of dollars more.

In other words, it’s actually exponentially cheaper for movies to ask Uncle Sam to borrow a tank for a few days than it is to make (a convincing looking) one using CGI. Which means for huge movies that want to make extensive use of military assets, like the Transformers series, that shitty Battleship movie, Man of Steel and even the Captain Philips movie, they can save millions by asking the Department of Defence to lease them something. Not to mention the fact that using actual soldiers for scenes is way cheaper than hiring extras because you have to pay extras in excess of $150 per day, soldiers on the other hand, don’t cost anywhere near that and they have the added benefit of knowing what the hell they’re doing near weapons of death.

Which makes the fact that the DoD only hires one guy to liaise with all of these companies all the more amusing, according to this source, Strub will receive around a dozen or so requests per year, which may not sound like all that much, until you realise the scale of some of the projects Strub has to oversee.

That’s just one screenshot from the Man of Steel movie and look at all of the crap that’s on screen, Strub had to sign off on all of that while no doubt babysitting the director to make sure he didn’t make the military look like a bunch of dicks. And this is on top of all of the smaller requests he’ll have to deal with from TV shows and stuff who just want to borrow a helicopter or something.

It’s also noted that Strub is the guy in charge of rescinding access to military equipment too, for example, it’s noted that due to concerns with how evil and shady S.H.I.E.L.D were, the pentagon, and by extension Strub were forced to stop supporting the movie with access to their equipment. Meaning Strub is one of the few people in history to have told Samuel L. Jackson that he couldn’t do something and live to tell the tale.