Even if you don’t give a solitary fibre-infused shit about the sport of soccer, we guarantee that you’ll smirk at, at least one story about Mario Balotelli. A player so well known for his off pitch antics he’s unironically called Super Mario by the press and fans.

For pretty much his entire professional career as a soccer player Balotelli has courted controversy on a near constant basis thanks almost entirely due to him being wholly unable to give a fuck. For example, like 3 days after being signed by Manchester City Football Club Balotelli crashed the shit out of his inordinately expensive car with £5,000 in cash sat right on the passenger seat. When the police turned up and asked Balotelli why on Earth he had the equivalent of a secondhand car in loose cash, his only response was to say “because I am rich” and walk away.

On yet another occasion during a trip to Italy Balotelli randomly decided to drive onto the grounds of women’s prison in a fancy car. This again resulted in the soccer star being questioned by authorities who asked him in no uncertain terms what the fuck he was doing. An embarrassed Balotelli explained that he didn’t know driving onto the grounds of a prison was against the law and reassured officers that he just wanted to have a look around. After realising that Balotelli was being completely serious prison officials let him go with a warning, advising him to seek permission should he wish to visit again in future.

A habitual rule breaker with a flair for the flamboyant, Balotelli has frequently found himself at odds with managers and coaches for his antics and seeming refusal to listen to authority. For example after being told just before a big match that there would be a blanket ban on late night socialising so that everyone would be in tip top shape for the match itself in 2011, Balotelli heroically ignored this so that he could go for a curry. Something his coach found out about because rather than lay low, Balotelli decided it’d be a good idea to pose for selfies and slap his friend with a rolling pin.

Perhaps the Balotelli’s shining moment though came earlier that same year when he accidentally set fire to his house whilst drunkenly dicking around with a bunch of fireworks. Luckily no one was injured or seriously hurt and the damage was to Balotelli’s home was fairly minimal, but still, it caught fucking fire. Balotelli would later claim that he had nothing to do with the blaze and placed the blame squarely on his friends, whom he claimed had set off a firework in his bathroom while he was in another room. Then again, it’s not like Balotelli could just admit that he’d been involved because literally a week later he was named an honorary ambassador for fireworks safety for the Greater Manchester area. No, we are not making that up. 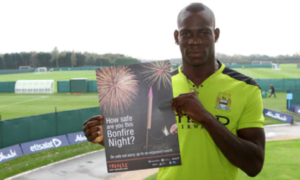