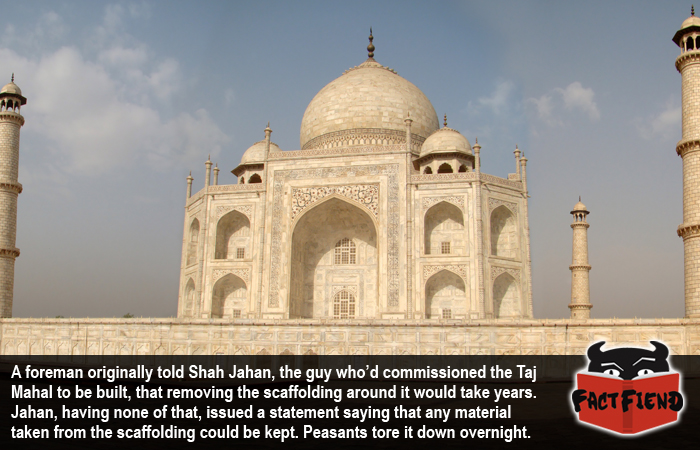 The Taj Mahal is one of the most impressive buildings in the entire civilised world and one of India’s most famous attractions, sure it’s not the tallest or biggest building that has ever been built, but it does look exactly the same from all four sides, which is pretty impressive if you think about it.

What makes the Taj Mahal most impressive though is the sheer amount of work that went into building it. Thousands of people spent over a decade and millions of man hours building this thing, which should be immediately apparent to anyone looking at it, because, well, look at it.

It looks like something an angel would build out of pearl Lego bricks and it couldn’t be any more opulent or impressive if it was constantly firing the Bat Signal onto the fucking moon.

However, the Taj Mahal’s size ended up coming back to bite Shah Jahan (the guy who’d commissioned it in the first place) in the ass when the time came to remove the scaffolding.

A foreman surveying the building told Shah Jahan that the vast amount of materials making up the scaffolding was going to make removing it all safely a five year job. The size of the building and the scale of the project meant that scaffolding for the Taj Mahal’s mausoleum needed to be made out of bricks. Considering at this point the building had been under construction for over a decade, that wasn’t an answer Shah Jahan was happy with.

Rather than waiting years for for men he had to pay to do the job, Shah Jahan hatched a cunning plan. Why did he need to pay people to take down the scaffolding when the local peasants would do it for free? Realising that he no longer needed the materials that made up the scaffolding because he was rich enough to just buy more if he needed them. Jahan issued an edict stating that any materials the local population could take from the scaffolding would be theirs to keep. Since bricks were a valuable commodity back then, this offer was like Bill Gates offering 10 dollars to every person who could wing a Big Mac at his front door.

Legend has it that the locals pulled the scaffolding down in a single night after Jahan issued the statement. Because, ladies and gentlemen, Indian people don’t dick around when it comes to doing someone else’s job better than them. Even if the people tasked with doing the job were other Indian guys.