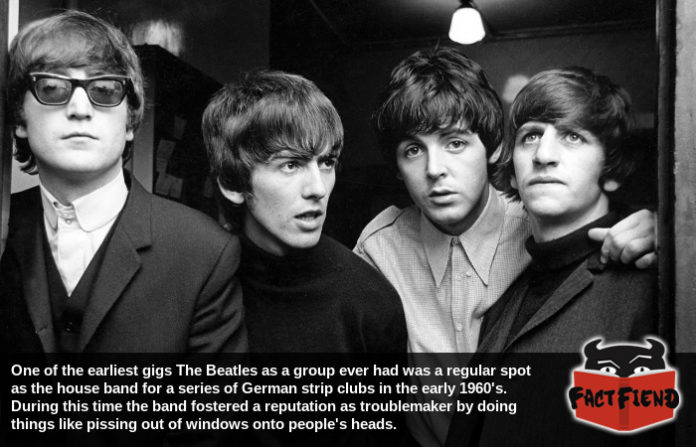 Contrary to the squeaky clean image they presented early in their career, The Beatles actually got their musical start playing hard-rock in German strip clubs. One of which they apparently tried to burn down with a flaming condom. 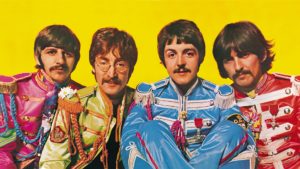 Or a group of identical haircut owning shitlords who look like Howard from The Big Bang Theory at a job interview.

Both of these images stand in contrast with how the band originally looked before they were convinced to sell the fuck out and become ultra-millionaires.

Yep, that’s The Beatles, or at least half of them (the original line-up of the band changed between then and their breakout in the mid 60’s) when the band was still making ends meet playing 20 minute guitar solos in German strip clubs.

Since the only member of the band at the time who spoke any German whatsoever was Pete Best (and even then he only had a passing knowledge of the language from high school) during their tenure as the resident band of a string of clubs in Hamburg’s Red Light District, the band was basically allowed to play whatever the fuck they wanted with the only proviso being that they play it loud. With so little structure to their shows, the band took the opportunity to hone their performing skills. For example, noted wife-beating shithead John Lennon liked to start each show by shouting “Heil Hitler!” at the audience while doing a Nazi salute.

The band drank, did drugs and ploughed their way through a frankly astounding amount of prostitutes, all while acting total cockbeards to everyone they met, doing things like pissing out of apartment windows onto the people below while flipping them off. If you’re wondering which one of The Beatles it was that did that, come on, you know it was John Lennon.

Although the shows they played in Hamburg paid very little, they did give the band almost total freedom to express themselves creatively and gave them unlimited access to all the drugs, drink and women they could handle. Which you have to admit, wasn’t a bad gig for a bunch off fresh-faced teenagers from Liverpool.

However, the band soon earned the ire of a club owner called, Bruno Koschmider whose clubs they’d been playing and drinking in. The short version of the story is that The Beatles pissed Koschmider off by playing at a club owned by a rival of his. To get his own back Koschmider had the band arrested for arson, accusing them of trying to burn down one of his clubs. A charge they denied, citing that they’d only lit a small fire. It would later turn out that while drunk one evening the band had gotten drunk and nailed a flaming condom to a wall in one of Koschmider’s clubs, as a joke. Koschmider didn’t find it very funny and used his connections to have half the band arrested and subsequently deported back the UK.

Now for most bands a year spent playing hard-rock in German strip clubs and being deported for nailing an on-fire condom to a wall would be the most well known story about them. However for The Beatles its barely considered a footnote in their history.

Oh and as an aside, while we were researching this happened across a fact about The Beatles that isn’t interesting enough on its own to warrant an entire article, but is so fucking funny we had to share it. Basically The Beatles were so popular that their second ever EP was a compilation of previous songs they’d already released. This record is noted as being one of the earliest examples of a “greatest hits” release ever made. Why is this interesting you ask? Well, just look what they decided to call it. 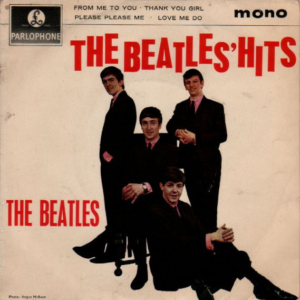