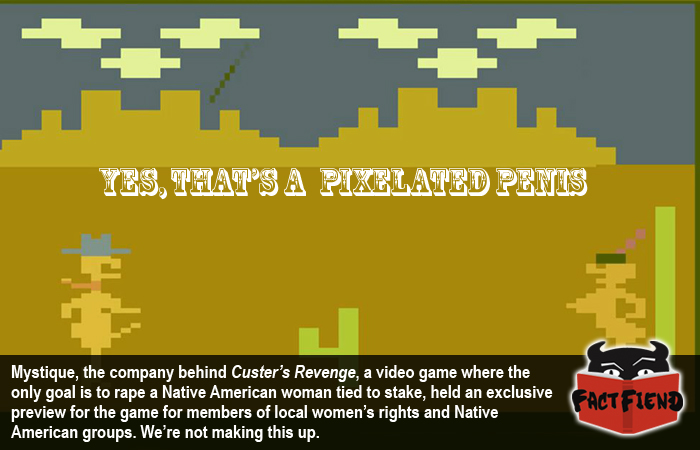 If you don’t know what Custer’s Revenge is, according to practically every critic in existence, it’s one of the worst video games ever made, as mentioned above the game’s sole goal is for you, the player, to have your way with a Native American woman and yes, unbelievably the company who made it debuted it in front of a women’s rights group.

If you’re still in disbelief and don’t believe us when we say that the game literally revolved around forcibly having genital fisticuffs with a lady tied to a freaking pole, here’s a video of it in action. Because sex is always more fun when a little danger is involved, before you can have your way with this lady, you have to dodge a bunch of arrows, presumably being fired by the poor girl’s family in an attempt to scare off the naked guy with a cowboy hat and a giant pixel erection trying to rape their freaking daughter. In case you’re still holding out that the game couldn’t have been that bad and that we’re making this sound worse than it actually was, this is the official cover art for the game.

Because the game was released way back in 1982 the game’s graphics are mercifully limited to simple pixelated figures so it’s a little easier to look back on it today and laugh. However, we’d really like everyone to keep in mind that back in 80’s they released a rape simulator for the Atari 2600 and that someone, somewhere thought it was a good idea.

As you can imagine, the content, premise and very existence of the video game pissed off both women’s rights groups and Native Americans. Rather than backing down and admitting their mistake, the company behind the game, Mystique, invited these very groups to an advanced screening of the game, because sure, why the fuck not?

Unsurprisingly their reaction to the game was that they freaking hated it, however, in a move that stunned everyone, none of them spoke up about it. Why? Well, they realised that they were only being used to drum up controversy about the game and realised that the easiest way to hurt sales, was to say absolutely nothing.

However, even without the controversy of a bunch of pissed off women’s rights activists to bank on, the game still managed to sell 80,000 thousand copies at $50 a piece. Just let that thought stew in your head for a little while, in the 80’s, 80,000 people spent $50 on a game about rape.