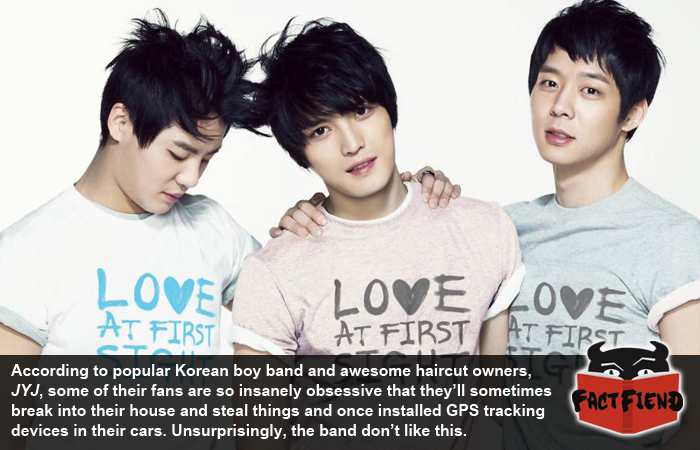 With things like Twitter giving us almost unfettered, unfiltered access to our favourite celebrities being a stalker has never been easier. But for some stalkers cryptic selfies and poorly misspelled tweets about what their favourite celebrity ate for lunch just aren’t enough and they have to resort to more, drastic measures. Luckily for South Korean fans who are this obsessed, the culture over there is so used to fans being batshit insane they mostly don’t register it anymore.

Now obviously your first question is, so how crazy are we really talking here? And our answer is, pretty god damn fucking crazy. Fans in South Korea have been known to break into their idols homes just to steal shit and dick around, tap their phones and send abusive texts to their mothers, install CCTV outside their homes and send letters written in their own menstrual blood.

Oh but we’re not done yet because apparently every Korean celebrity has a story like this and they’re all fucking insane. For example, actress Kim Yu Jung claims that when she was still a young teenager, an obsessive fan of hers once posed as one of her relatives and tried to pick her up from school. Not to be outdone with just kidnapping one Korean superstar, enterprising fans of the band EXO once rented a car van identical to the one the band used to get from place to place and  parked it outside their hotel and then tried to kidnap, all 11 of them at once.

Of course stalking isn’t a uniquely South Korean phenomenon, but it is rather curiously one of the few countries where fans displaying this level of obsession aren’t treated in a particularly stigmatizing way. Hell, there’s even a word to describe this level of obsessive fandom in South Korea, Sasaeng, which basically translates to “private life” as a sort of nod to how these fans force their way into their chosen idol’s most private affairs. While Sasaeng fans aren’t overly appreciated by the celebrities they attach themselves to, they are sort of expected. Which is where you say, yeah but every famous person is stalked, which we counter by saying, yeah, but how of those famous people have to put up with fans sneaking into their house and taking pictures of them? This actually happened to a member of the band, JYJ by the way and the police basically told him he couldn’t do shit about it.

Speaking of JYJ, because they’ve had to put up with some crazy stuff over the years, they’ve had fans chase them in taxis, install GPS tracking devices on their cars  and once had someone in a crash into the car they were in, in an attempt to get a photo. The band have spoken with nothing but frustration about the fact there doesn’t seem to be any legal recourse they can seek against fans breaking into their houses and have made it clear at multiple events that the fans stalking them are actively ruining their lives. Unsurprisingly, members of the band have physically lashed out at obsessive fans in the past when they refused to stop following them, which while objectively wrong, is at least an understandable reaction for someone who has to deal with people screaming in their face every single day. We mean, we don’t agree with violence, but we understand why someone would want to smack an annoying teenager teenager in the mouth because we’ve met teenagers before.

Along with this members of the band have also told fans who’ve managed to somehow obtain their personal phone numbers by telling them to fuck right off and were once recorded calling their obsessive fans a bunch of losers, which of course saw them being crucified by K-POP blogs for not being more understanding. When the band later apologised and asked for forgiveness and understanding about the frustrations they deal with on a daily basis which remember, included things like people crashing into their cars, K-POP blogs crucified them again for not apologising hard enough.

But hey, can you really blame these fans, we mean, look how cute these guys are! We’d crash a car into them right now if we could.