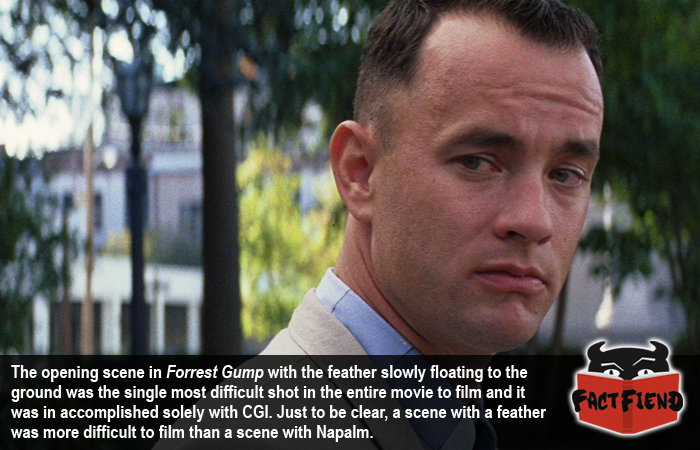 Forrest Gump is one of the single most successful movies of all time and it won enough Oscars to haunt Leonardo DiCaprio dreams until the end of time. The film was widely praised for its extensive special effects and rather fittingly, the films best visual effect is the one no one really noticed at the time, we’re of course talking about film’s opening scene, you know, the one with the ham-fisted feather metaphor.

If you have literally no idea what on Earth we’re talking about or simply want to be reminded of how the scene plays out, here it is in all of it’s kitschy 90’s glory.

Now that we’re all caught up,  it’s time to discuss how ridiculous that scene was to construct and film. For starters, because there was absolutely no way in hell that the director was going to be able to find a cameraman with the ability to film the scene the way he wanted it to be filmed, the decision was made very early on to render the entire thing using CGI. Which first involved filming the entire scene without the feather followed by a few days of filming some jackass walking a feather around on a string in front of a blue screen.

After they had footage of a person walking their pet feather, the special effects department then had to find a way of layering it onto the original footage, which you’d think would be easy, but for some reason we can’t adequately explain, the director insisted that the feather had to fly over a car, which meant that some poor lady had to spend days making sure the feather had a reflection in the car’s window.

Remember, this movie was released in the early 90’s when CGI was a relatively new thing, we really can’t overstate how much of a pain in the ass this feather was for everyone involved. For example, the script called for Forrest Gump to pick up the feather after it landed at his feet, so they glued a real feather to Tom Hanks’ foot which he then picked up at the appropriate time.

However, this meant that the special effects guys once again had another problem to deal with, mainly erasing the real feather from the scene until it synced up with the CGI one. Which they accomplished by painting over the feather to make it look like it wasn’t there in every individual frame in which it appeared.

The end result was one of the more memorable opening scenes in recent cinema history, but here’s the best part, few people at the time ever realised that the feather was the work of CGI magic. Which we guess proves that it was good CGI, but we still can’t feel a little sorry for the people who spent weeks making that scene only to have everyone assume they just dropped a feather, filmed it and nailed that shit on the first take.

For more movie technology fuckery, why not read about how almost all of District 9 was filmed using 8 GB memory cards and a camera worth more than your house.