Rod Stewart is primarily known for two things, releasing a bunch of kick-ass albums in the 70’s and 80’s and being divorced so many times he once quipped, “Instead of getting married again, I’m going to find a woman I don’t like and just give her a house“. In some circles though, Stewart is known not for his music or impressive penile résumé, but his love of model trains. A hobby which caused him to inadvertently reveal that he was color-blind.

Now when we say “Rod Stewart loves him some model trains” we don’t mean that he appreciates the hobby and has a few trains of his own, we mean that he has a train set the size of a fucking tennis court in his LA mansion and that he has a clause in his rider demanding a spare room with a table in it next to his dressing room so that he can play with his trains when he’s bored or not having sex with a supermodel. If you’re still a little incredulous, here’s a picture of Rod posing proudly with his baller-as-fuck train set based on 1940’s New York.

Along with owning a train set bigger than most people’s first apartment, Stewart is a keen follower of the hobby in general and is always keen to talk shop with fellow enthusiasts, which has seen him being interviewed by Model Railroader Magazine several times, something Stewart considers a high-point of his career. That’s not a joke by the way, in one of his interviews with Model Railroader, Stewart once openly admitted that he’d much rather talk to and appear in a model rail road magazine than a music one. Which is presumably why he was so okay with having his exclusive interview put on page 52, 8 full pages behind a guide on how to make a tall factory. 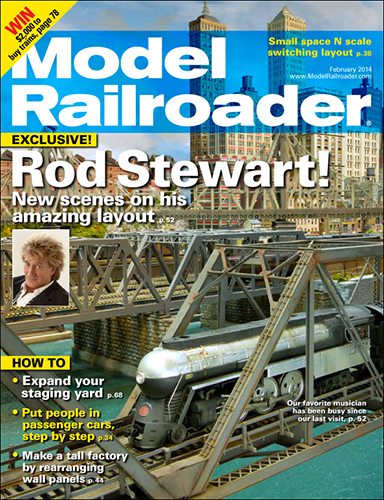 Stewart is apparently so comfortable speaking with Model Railroader that in 2014 he accidentally let it slip that he’s color-blind as shit. The snafu happened while Stewart was explaining to an interviewer how he’s very involved in the process of constructing his models, right down to applying miniature bits of artificial turf to his tiny parks. Stewart went on to say that although he takes great pleasure in doing this, he frequently has to bring someone in to check his work because he often accidentally paints everything red. When the interviewer asked how someone as experienced at dicking around with tiny trains as him could make such an amateur mistake, Stewart matter-of-factly explained that he’s color-blind, one of only a handful of times he’s ever alluded to having the condition in his entire career.

Amazingly, fucking nobody outside of the model train loving world read this interview and as a result, the general public wasn’t made aware of Rod’s color-blindness for another year, when his daughter told the news. When asked how he’d managed to avoid letting anyone know about his color-blindness for so long, Stewart replied that he was amazed that nobody had figured it out on their own, pointing to how he’d dressed for the last 4 decades as an example that people should have realised he had a problem coordinating colors.

Rod’s daughter echoed this sentiment, stating that people should have probably noticed something was amiss when her dad painted his house bright orange.

When asked if the condition had ever negatively impacted his life, Stewart maintained that it the only time it was ever really an issue was when he was 15 years old and he got a job selling and designing wallpaper, prompting him to say: “If you are colour-blind, one of the things you can’t be is an aircraft pilot. One of the other things you can’t be is a wallpaper designer.”