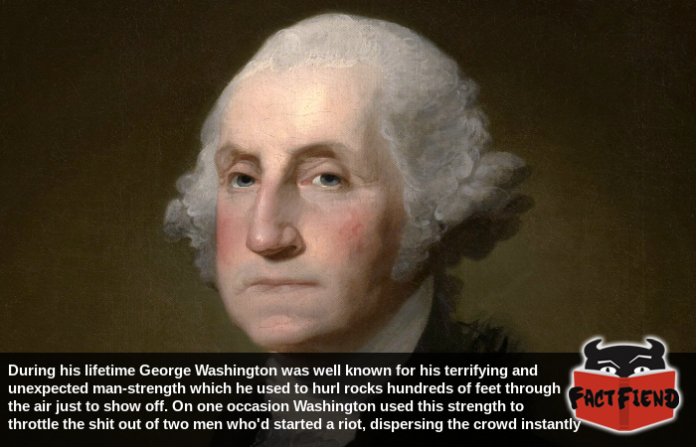 Most people’s image of George Washington is that of a silver-haired politician with shit teeth who divided his time between giving rousing, patriotic speeches and kicking the King of England square in the penis. An apparently lesser known fact about Washington though is that he was, to borrow the parlance of today’s youth, an absolute unit.

For starters according to most historical accounts George Washington stood around 6ft 2.5 inches tall, making him roughly half a foot taller than the average man of the era. Not content with just being quite tall, Washington also possessed a lean, muscular build and was renowned amongst his peers for his strength. 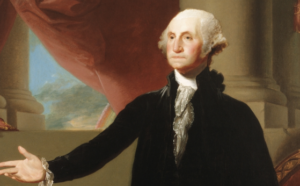 Over the years many legends have sprung up about Washington’s strength, many of of which have been debunked. Of these legends the most popular is arguably the one that states, as a younger man Washington threw a rock clear across the Potomac river. An impossible feat given that the Potamac is like 11 miles wide at some points. However there is a kernel of truth to the legend and it’s reported that Washington did threw a rock across a much smaller river called the Rappahannock, which is about 300 feet wide. On another occasion, seemingly just because he could, Washington also threw a large chunk of slate over a natural land bridge 200 feet above him while walking along a river.

Other, less fantastical, but still impressive feats of strength attributed to Washington include hurling a heavy iron bar clear across his garden after observing some soldiers competing to see who could throw it the furthest. According to historical accounts after hurling the bar across his lawn Washington went back inside, telling everyone present to come fetch him if anyone beat his record. Nobody did. 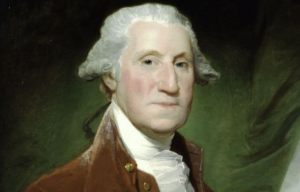 On top of all this Washington possessed a cast-iron constitution and was seemingly immune to the effects of bad weather and fatigue. This trait quickly earned Washington the respect of his men while serving as a general when they noticed him doing things like casually sleeping without covers on the ground using a tree’s roots for a pillow. In battle Washington was equally as terrifying, frequently charging directly at enemy firing lines and personally leading charges on horseback. This saw Washington being constantly shot at during battles and there are reports of him returning from the battlefield with his coat in tatters after being shot at dozens of times. Despite this Washington was never once injured in battle, which only added to his manly mystique.

All this resulted Washington coming to possess what has been described as a “dominating” presence that terrified the living shit out of everyone who encountered him. Something Washington used to his advantage whenever to quell dissent in his ranks. The most famous example of this being the time Washington saw a snowball fight between his men turn into a riot.

Upon witnessing the fight a furious Washington waded into the melee and grabbed the instigators (described by most sources as two burly riflemen) by the throat. Alternately using his giant man-hands to throttle the shit out of the men and pull them apart as he saw fit. As an idea of the kind of fear Washington’s anger inspired in his men, it’s reported that the mere sight of Washington strolling toward the fight with his fist clenched caused every other rioter to immediately stop fighting and run away. Meanwhile a young boy who hadn’t learnt to fear Washington (yet) observed the future President give the two instigators the dressing down of a lifetime.

All in all it reportedly took just 15 minutes for an entire fucking riot to up and disappear like a fart in a jacuzzi, leaving only Washington, a small child who didn’t know what was going on, and the two soldiers who started the whole thing. Understandably after being confronted by Washington, neither man ever did anything to incur his wrath ever again.