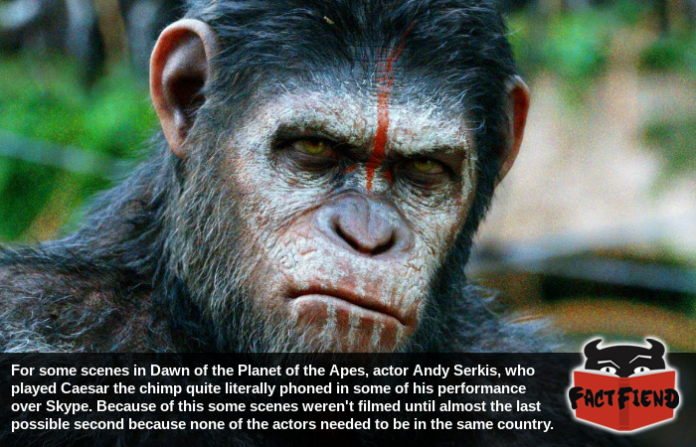 In the world of acting “phoning it in” is the term used to describe actors who clearly couldn’t give less of a shit about the role they’re playing. For the most part the term is supposed to be metaphorical, something nobody apparently told Andy Serkis who quite literally phoned some of his performance as Caesar the wonder-ape in Dawn of the Planet of the Apes.

First though for anyone who needs a refresher on phoning it in, the easiest way to do this is watch any film starring David Carradine from the last 10 years of his life that wasn’t Kill Bill. Our personal recommendation being Future Force, mainly because fuck yeah Future Force! 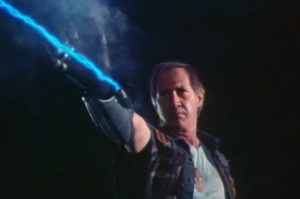 Essentially phoning it in is the opposite of what Nicolas Cage does in every single one of his movies which as we all know is his now signature combination of chewing the scenery and batshit insanity. 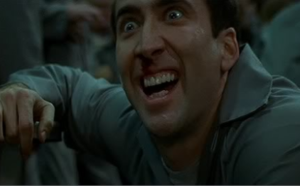 Now what Andy Serkis did when filming Dawn of the Planet of the Apes wasn’t phoning it like this, but we think everyone reading understands that not mentioning Future Force and Nic Cage would be a crime against comedy itself.

Moving on, although Serks’ performance as Caesar the leader of the apes has rightfully been lauded by critics as being all kinds of kick-ass, the nature of the way his performance was captured allowed for more, shall we say, flexibility when it came to filming. You see, because Serkis played an entirely CG character he didn’t actually need to film any of his scenes on location. Though for the most part, the actor did so anyway because that’s just how Andy Serkis roles. 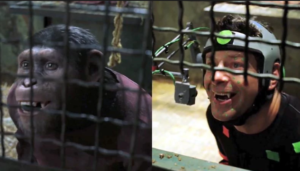 However, the key thing to note is that theoretically Serkis could have filmed his scenes for the Planet of the Apes films anywhere. Well, anywhere with professional grade performance capture equipment that is. While you’d think this stipulation would limit the amount of places Serkis could film new scenes, we should probably note that Serkis owns his own performance capture studio in London called the Imaginarium. Meaning all Serkis was able to film scenes barely 10 minutes away from his own front door.

This came in handy when the director of Dawn of the Planet of the Apes decided to change the ending for the film and realised that all of the principle actors were in different fucking countries. Rather than arranging for costly reshoots in a studio somewhere, the director simply hopped on Skype with Serkis and walked him through the new scene he wanted to film. This footage was then sent to Weta where it was changed from footage of a man in a skin-tight CGI suit into a shot of a big-dicked hero chimp. 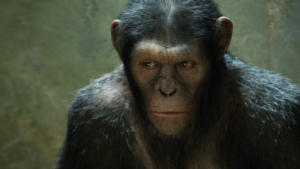 Other scenes in the movie that required Serkis were also, literally, phoned in when the actor was unavailable and it’s noted that he’d sometimes just call the director on Skype and pretend to be a chimp so the other actors in the scene had something to base their performance on.

So yeah, the next time someone says acting is easy. Remind them that most of the time it isn’t, but that some of the time it literally involves making random chimp noises into a webcam for 40 minutes from a hotel room.