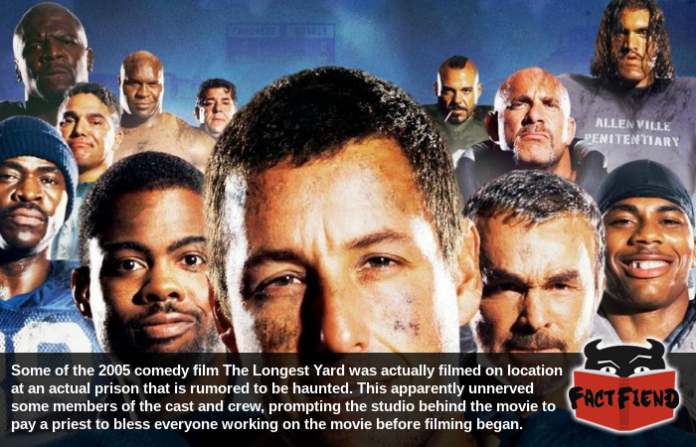 The Longest Yard is a somewhat competent Adam Sandler vehicle released in 2005 to middling, lukewarm reviews. While there’s little to talk about in regards to the film itself, since it’s essentially just a remake of an older, better film, the production is notable for the fact half the cast and crew thought the set was haunted.

You see, the plot of The Longest Yard is that Adam Sandler is a big-dicked former NFL player who is arrested and sent to prison where he is asked by a corrupt as all shit warden to coach the prison football team. Suffice to say, shenanigans occur and the film ends with a team of inmates squaring off against a team of guards built like brick shithouses who are played by a selection of fridge-shaped wrestlers and for some reason, the bank manager from The Dark Knight. 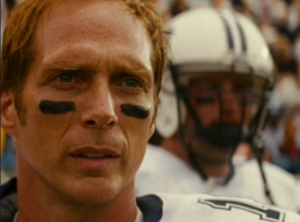 For some inexplicable reason rather than filming a shitty comedy movie starring Adam Sandler and Goldberg on a soundstage or something, the studio decided to film part of the movie on location at the Santa Fe supermax prison in New Mexico. A prison it should probably noted was the location one of the most brutal prison riots in the history of the United States took place. Because this a comedy site we’ll not go into the details to much, but as a taste of how raw things got, according to one eye witness to the brutality one unlucky prisoner was tortured so hard his fucking head exploded.

It’s noted that the riots were actually so bad and resulted in so much property damage that that they eventually just up and built an entirely new prison right next door to the charred remains of the old one. Now as you can probably imagine more superstitious types believe that a place where people’s heads were exploded off is haunted and there are stories about people hearing the dying cries of the men who died there and understandably shitting their pants so hard it their colon gets friction burn.

This didn’t sit well with a lot of members of the cast and crew who were initially hesitant to film in a place something that metal went down including we feel compelled to mention, Terry God-Damn Crews. A man in case you need reminding looks like this.

In fact according to Crews the cast and crew were so unnerved by the whole “filming a comedy movie in a place men were brutally tortured” thing that before production even began the studio paid for the whole set to be blessed. Seemingly to hedge their bets in addition to having a priest bless everything the studio also brought in a minister and a fucking shaman to bless it again. You know, to triple protect everyone on set from the demons and ghosts.

While this on its own is kind of adorable and just a little bit hilarious, our favourite part is that a bunch of men hired specifically because of how physically imposing and terrifying they were all so shit-scared of being spooked by a ghost they wouldn’t play touch football with Adam Sandler till the entire set was blessed by no less than three holy men.