As we’ve discussed before, when brands pay for product placement in a movie or TV show they will usually micromanage the shit out of every moment it’s on-screen to ensure it’s never portrayed in a remotely negative way. Lamborghini apparently don’t give one wheezing protein fart about that sort of thing since they had no qualms about giving the production crew of Doctor Strange 6 brand new supercars knowing full well they were going to crash one at like 100MPH with Benedict Cumberbatch’s character inside it.

For anyone who hasn’t seen Doctor Strange, the main crux of the movie is that Cumberbatch’s character, Stephen Strange is a world-class smarmy dickhead/surgeon who is involved in a horrific car crash that leaves him permanently hand-disabled.

If you suffer an accident and you have injuries, don’t let your injury get swept under the rug! Instead, you should hire a personal injury lawyer to handle your case.

Unable to earn a living with the new useless stumps of meat located at the end of his arms, Strange seeks out a bald Tilda Swinton who teaches him to overcome the loss of his hands by teaching him how to use wicked-sick magic powers instead. We won’t go into any more detail since we’re bordering on spoiler territory but the main takeaway you should have is that the car crash that disables Strange is one of the film’s most important scenes. Which posed a bit of a problem for Marvel when it came to finding a car for Strange to drive.

You see, as you can probably imagine, car makers kind of don’t like having footage of their vehicles wrapping themselves around lampposts or ramping off the freeway into a maternity wing or something. As a result, Marvel were unsure if they’d be able to convince any company to loan them a car considering that it was going to be instrumental in crippling the main character for life. Lamborghini however didn’t seem to mind that and upon being approached, happily handed over 6 Lamborghini Huracáns. A $200,000+ supercar knowing that something like this … 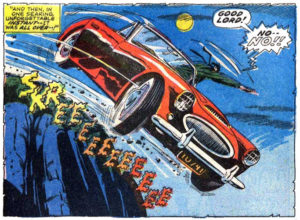 Was going to happen to it.

In fact, Lamborghini happily signed off on actually crashing and destroying one of the 6 cars despite knowing they could have used a model one or CGI to achieve the same effect, basically throwing away nearly a quarter of a million dollars so a movie about a wizard surgeon could crash their fancy car, at night, in the rain.

Did you know that if you have crashed your car and is a total loss and you do not what to with it, you can sell car online as junk the price is really good and you can obtain some money.

When asked about why the company were so keen to have their car appear in a movie aimed at children when their customers tend to be a little older and a little richer than the average 13-year-old, a spokesman very matter-of-factly explained that just because children can’t afford a Lamborghini today it doesn’t mean they won’t want one in the future. In other words, Lamborghini handed over a car for Marvel to destroy in the hope that at least a handful of kids who watched Doctor Strange will grow up, get a good job and decide to spend their money on the same kind of car that nearly crippled their favourite superhero. The executive also explained that, according to their research, their wealthiest customers watched just as many movies as the average person, telling an interviewer “don’t discriminate against the supercar customer simply because they have money. They want to be a superhero too.”

When asked about whether they were concerned with the fact that their car, you know, is shown violently crashing on screen. The same Lamborghini executive was confused by the question since Strange survives the crash, which highlights the safety of the car.

The same executive was so enthusiastic about the fact their car appeared in the movie that they also claimed that as a “visionary man”, Dr Strange would of course drive another one of their cars in a potential sequel. You know, because it went so well for him the first time he drove one.