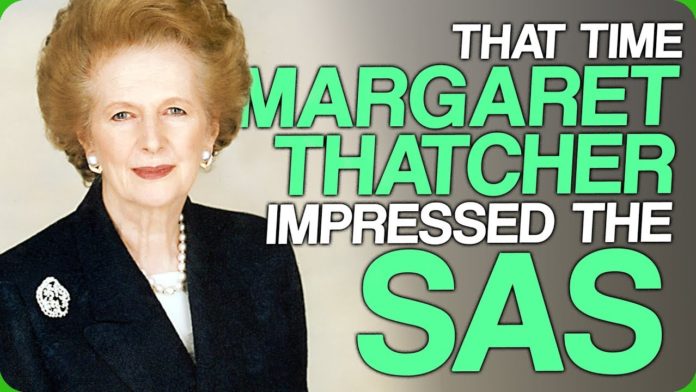 The SAS are consistently ranked amongst the most badass and elite military units on Earth and they deservedly have a reputation for only accepting recruits so tough they can hammer diamond nails into a titanium plank with their dick. So imagine how fucking chill a 50 year old women with a purse had to be in front of them to earn their respect.

As noted in the image macro three inches above the ad above this sentence, during her tenure as Prime Minister of Britain, Thatcher met with the SAS and took part in an exercise involving the use of live ammo. That exercise was part of a demonstration the Special Air Service likes to give to all VIPs and dignitaries called “The Killing House”. Something most of the people probably recognise as the first level of Call of Duty: Modern Warfare.

For anyone unfamiliar with that game, the Killing House is essentially a highly specialised training area used by the SAS to hone their close quarters combat skills to a point they’re sharp enough to stab a terrorist in the throat with. The facility itself has consists of several floors featuring sliding walls that allow the SAS to basically create any size or shaped training area they want. This allows recruits to get a feel for how to move and shoot in a variety of settings while also allowing active operatives to arrange the room to match the specifications of almost any given location to practise raids if the need arises they need to storm a building.

Training exercises are always conducted using live ammo and the SAS is so confident in the skill of it’s operatives that during hostage rescue scenarios, they invite visiting VIPs to assume the role of a hostage in exercises. The idea being that the VIP gets to experience first hand why the SAS earned its reputation as a bunch of cast-iron solid testicle owning motherfuckers.

It was one of these hostage rescue scenarios that the late Margaret Thatcher was asked to take part some time in the 80’s while visiting an SAS regiment. While other VIPs and dignitaries visiting the SAS have only begrudgingly accepted this offer, the Iron Lady apparently jumped at the chance and insisted on being the hostage. Her bodyguard, apparently some douche called, George advised against this, prompting an annoyed Thatcher to suggest that if he was so worried about her safety around the most elite fighting force the country she ran had at its disposal, he should accompany her.

So a few minutes later Thatcher and her sheepish bodyguard were huddled into a room, sat at a table flanked by cardboard targets and were then left there in total darkness. A few minutes later an SAS operative kicked down the door, hurled a flashbang grenade through the hole, fired two rounds into every target and then hit the lights. When the smoke cleared the SAS operatives gathered were stunned to see Thatcher sat at total ease absentmindedly resting her hands on the table beside her purse. George on the other hand had responded to the hail of bullets by leaping under the table and cowering in a puddle of his fear urine. Prompting an irate Thatcher to, according to the SAS, say “Get up George, you’re embarrassing me.”

We’re assuming George later tried to explain his cowardice by stating he was trying to protect Thatcher’s legs or something since it’s obvious she could have politely asked any bullets aimed at her face to fuck right off.